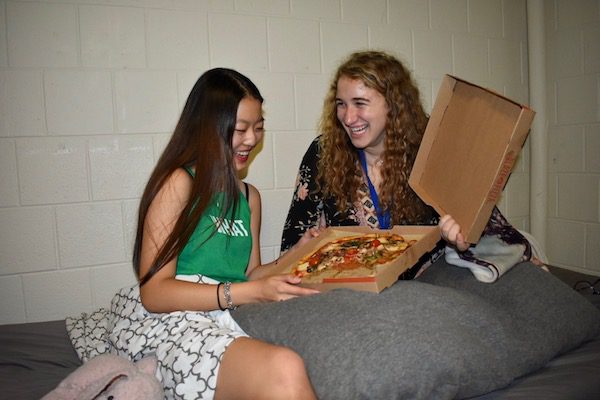 When I received my cherubs acceptance letter in the mail, I shrieked with excitement. My first summer camp; my first chance to learn journalism away from the high school paper. But as the start of camp inched closer, I kept thinking about my roommate-to-be. Who would she be?

I envisioned a girl from Montana. We complimented each other and when we met that first day, everything would just click. From then on, nights would be for storytelling not sleeping. Eventually she’d drive out to Pennsylvania to see me, and I’d plan a road trip to Montana just to see her. After a few years, our friendship would grow into a sisterhood, and one day she would become my maid of honor. It was an ambitious vision, but I couldn’t help but wonder.

That curiosity grew as I took my first steps on floor two of East Fairchild. Each door held a decorative name plate and hometown decal. Seeing cities like Indianapolis and Los Angeles in big bold letters, nerves buckled my stomach tighter and tighter. When I finally approached my room, I read “Avery Maslowsky, Berwyn, Pennsylvania” and then “Kirsten Huh, Seoul, South Korea.”

My heart dropped. The roommate blueprint I had been drawing up since April was instantaneously disrupted. Being away from home for the first time, I found comfort in the Montana girl I drew up in my head. But Kirsten was a complete stranger.

After both of our parents departed, we just sat looking at one another. I felt tense. But after a few starter questions on how she liked the weather in Chicago, our short dialogue morphed into deep conversation on each other’s cultures.

I learned the significance of pressing your thumb and index finger together to represent admiration and the thrill of busking, or street singing. I’ve taught her that Lay’s Potato Chips come in more flavors than just original and that alternative music is the best to fall asleep to. But I also learned that just because we grew up in two different worlds doesn’t mean we are all that different. We both wear Urban Outfitters clothes, sing and love Kraft Mac & Cheese.

A few months ago, I would have scoffed at the idea of having a roommate severely afraid of bugs or one that wakes up to K-pop every morning, but now I can’t imagine being at the Medill cherubs program without that.

So maybe I’ll invest in a plane ticket to Seoul to see Kirsten busking on the street, or maybe I’ll run into her one day on the streets in New York City as she strolls out of Urban Outfitters with a big shopping bag — it doesn’t really matter to me. We will always be able to call room 201 our home.