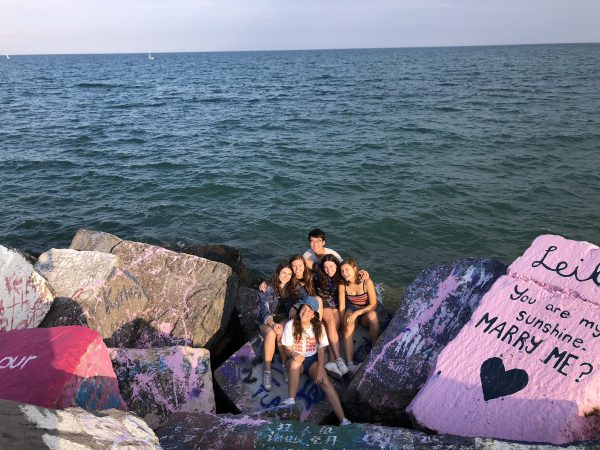 Cherubs sit on the painted rocks by the Lakefill. Left to right are Mira Dwyer, Maddie Aitken, Yalda Khodadad in the foreground, Noah Somphone, Rachel Carlson and Sophia DeLuca. Photo by Halsey Smith

As I pulled my suitcases toward East Fairchild on July 1, I remember exchanging Snapchats with a friend from home about what my roommate would be like. He asked, “what if u get a single?” I’d thought about it — what would happen if I was alone? In my mind, being roommate-less was the worst option. I responded with a picture of my forehead captioned, “lol, the packet said most students get a double, i’ll prob be fine. watch me be the one girl w a single tho.”

At check-in, my photo was taken and the community associates gave me a keycard and helped me take my luggage to my room. On the way, I nervously asked Andrew Golden, one of the Community associates, whether he knew if I had a single or a double. You guessed it — I got a single. As I unpacked, I tearily called my mom and told her the news.

“You’ll be fine,” my mom promised. “Maybe this is a good thing!”

After I finished unpacking, I grabbed my keycard, determined to make new friends. As I left my room, I joined three girls headed down the stairs. They were the first out of 83 people who would share my summer experience. We wandered around campus and returned to the dorm after our makeshift tour, joining a larger group of people in the main common room. From there, I began to introduce myself to more and more cherubs.

That night, I sat on the second-floor common room and played Never Have I Ever and Paranoia, and introduced myself and said where I was from at least 30 times. That night, I fell asleep the instant my head hit the pillow. So much for my need to bond with a roommate at night.

Though it took me a while to get accustomed to my own space, my fear of missing out began to fade as I found my place. I spent more time in the common room than my room anyway, and I’ve never been more thankful. Being in a single means that I don’t have someone to make sure I get up in time for lectures and field trips, or to let me in if I forget my key (see: Yalda was spitlisted three times in one week), but I can nap when I want, sleep when I want and call my California friends late at night without bothering anybody.

Dear future cherubs: If you’re a woeful single-roomer, do not fear. You’ll realize how lucky you are during the week of trend story, when you’re taking a nap at 2 a.m.