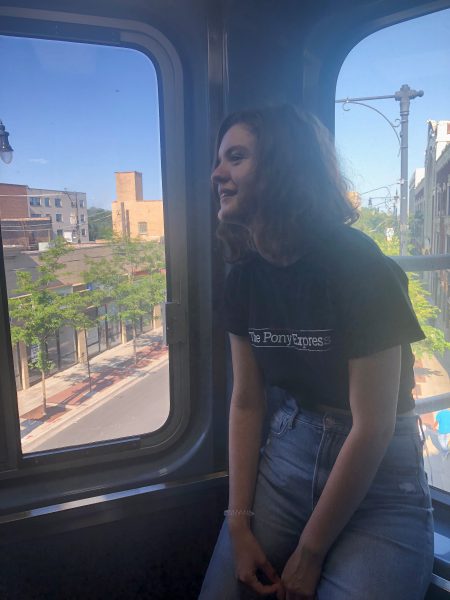 Abby Banks sits on a window ledge on the L during the return ride from a Chicago Cubs game. Photo by Sophie Stephens

I wasn’t intending to be a part of the “Trump Bump.” Newspaper class was an accident. My guidance counselor slotted me into a filler class because I couldn’t get into AP Physics. Yet here I am, three years later, chugging along into my second year as editor-in-chief, spending my summer working with 83 other rising seniors who are equally passionate about reporting. Journalism became my life because my stubborn nature refused to let a president who personifies injustice and prejudice push a field of dedicated, caring people into the dirt.

Every day I field classmates’ questions about journalism and its role in a changing political landscape. I’m a liberal ambassador to my moderately conservative high school. It’s awkward when you know that kid in the corner of your history class thinks that you’re “an enemy of the people.” It’s awkward when the English teacher tells the entire class to always think about credibility when you read The New York Times. It’s awkward when eyes go to you whenever fake news is mentioned.

Usually I can ignore it. But every once in a while, my stubborn streak makes me want to present statistics and facts about actual fake news. I keep plugging away at editorials that few of my classmates read (print journalism is dead, after all). I sit and I stew and I scream when I get into the newsroom, land of sympathetic ears.

Then I get to a place like the Medill cherub program. It feels impossible to come here and not want to spend the rest of your life in a newsroom. The instructors infect you with stories about real publications; the guest lecturers like Pulitzer Prize-winner Patricia Callahan fill you with ambition to go save lives with your writing. I would walk through fire to get a story. I felt like I did, walking three miles in 95-degree heat to cover a Fourth of July parade.

Fake news isn’t going away. Unfortunately, neither are my high school classmates, who don’t understand what I and thousands of other journalists do. They might not ever understand, and that hurts. But through cherubs, I gained a support network. It struck a chord with people. Many shared experiences with that kid in the back of the classroom who thinks you’re out to destroy democracy. Sometimes that empathy makes it just a bit more bearable. Sometimes that’s all you need. But sometimes you need to get up and fight a little bit harder. So I will go back to the classroom, and I will write a kick-ass article about why I would go anywhere to discover truth, and I will make that kid in the back of the class just a bit less cynical. I will not give up, and neither will any of the other cherubs.