Carving out time to exercise is a challenge for cherubs as they balance dozens of interviews and 9 a.m.-to-7 p.m. lectures. It takes a persistent alarm clock and a nagging conscience to crawl out of bed before breakfast, and even more willpower to opt out of a night trip for Andy’s Frozen Custard.

To prepare for the cross country season, Aidan Duffy of Princeton, New Jersey, squeezes in a “quick run” (5 miles) every morning.

“The path near the lake is really scenic early in the morning,” Duffy said. “If you wake up at around 6:30 or 7 a.m., you can get a good view of the sun glistening right over the water and it’s just a great way to start your day.”

Five days a week, Chloe Cope of Boulder, Colorado, starts her day at 6:45 a.m. with a 4.6-mile run around the Lakefill and along Clark Street Beach. She said it helps to do it with a friend because then she won’t bail, and that the people-watching by the lake is a fun incentive.

“I’ve seen baby showers and weddings,” Cope said. “People do gender reveal parties now. I was running past, and I paused because I wanted to see the gender of the baby. They had big balloons, and everybody counted down and popped the balloon and blue confetti came out… It was a boy.”

Cope said mornings are the best running time because the temperature is cooler, and she can sometimes watch the sun rise. It becomes harder to work out during the middle of weekdays because cherubs are interviewing sources, editing articles or taking naps between lectures. 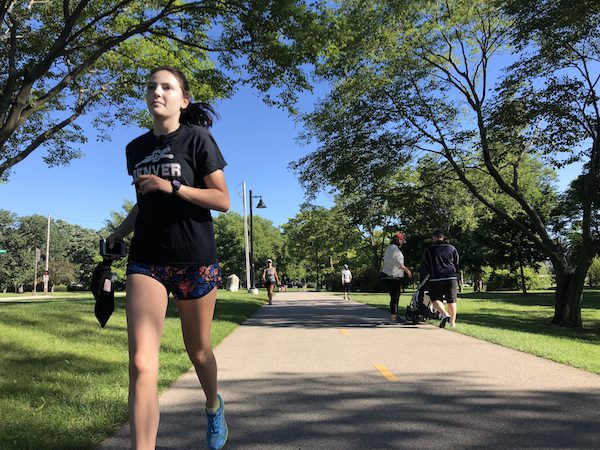 Chloe Cope goes for a run at Dawes Park. She runs five times a week. Photo by Jasmine Javaheri

Although running by the Lakefill is an efficient and scenic way to work out, the campus provides other exercise facilities such as the Henry Crown Sports Pavilion. The facility houses a swimming pool, six tennis courts, a weight room and a dance studio — all of which are available to cherubs willing to walk a mile and pay $9.

Despite the early trek, Kylie Lin of Belmont, California, swam a few times at the sports pavilion before morning lectures.

“The fact that there is a pool at all is really nice,” said Lin. “The temperature is great. It is Olympic-sized.”

The cherub dorm, East Fairchild, has a small, free gym in the basement. Sophie Driscoll of Westport, Connecticut, said she wished she had known about the convenient gym.

“I would have been more likely to work out,” Driscoll said.

Other cherubs arrived with plans to exercise but soon realized that amid assignments and blossoming friendships, working out would not be a priority.

“I came here thinking I was going to prepare myself for the upcoming soccer season,” said Jason Beeferman of Great Neck, New York. “I realized that all things are trivial when compared to journalism, and sleep is precious.”

Libby Markham of Darien, Connecticut, found herself getting sidetracked by activities unrelated to journalism.

“I really was determined to run, but even when I got dressed and ready, I ended up walking and FaceTiming people from home,” she said.

Because cherubs is a journalism program, contacting 10 sources is a higher priority than running 10 miles.

“Don’t tell yourself ‘I am going to run every day and wake up at six,’ ” Lin said.