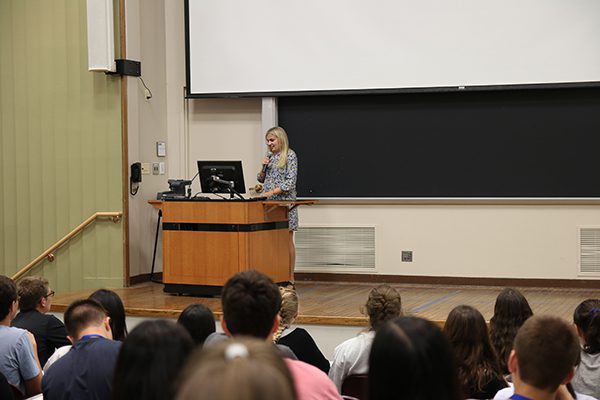 Ciesemier founded the nonprofit organization Kids Caring 4 Kids when she was 11 after watching an Oprah episode about African AIDs orphans. The program inspired her to pursue journalism.

“Storytelling was the thread that held all of my passions together,” she said.

Now, Ciesemier produces opinion video for Mic. In her July 5 presentation, “The Story Behind the Story of a Presidential Commutation,” Ciesemier discussed the impact social media can have on journalism by describing a project she worked on for her current job.

In October 2017, Ciesemier’s team produced a video about Alice Marie Johnson, a 63-year-old great-grandmother serving a life sentence in federal prison for a first-time nonviolent drug offense. The video garnered national attention on Twitter and inspired celebrity Kim Kardashian West to work with Mic to hire a legal team that would lead to the eventual commutation of Johnson’s sentence.

Ciesemier said she follows a project through from start to finish. She is part of every stage from pre-production to post-production.

During her presentation, Ciesemier also discussed the struggle to find her path after graduating in 2015 from Georgetown University, where she majored in sociology and minored in journalism and theology.

Sydney Bergan of Andover, Massachusetts, said she followed Johnson’s story as it unfolded last year. She said she enjoyed hearing about the process Mic went through to make the video.

“She talked about struggling to figure out what she wanted to do and find a job even though she went to a really amazing school and had a great education,” Bergan said. “It was reassuring to hear that things take time.”

Throughout the five weeks, cherubs heard from guest speakers who — like Ciesemier — work in many forms of journalism.

“The presentation widened my perspective of what you can do with a journalism degree,” Bergan said. “She’s covering news but in a different way that reaches a different audience. That’s really appealing to me. I like the way they use multimedia and can put it out on channels like Facebook and Instagram and have it be successful.”

“It gave me a good idea of what it’s like to follow a news story from the perspective of a startup media outlet,” he said.