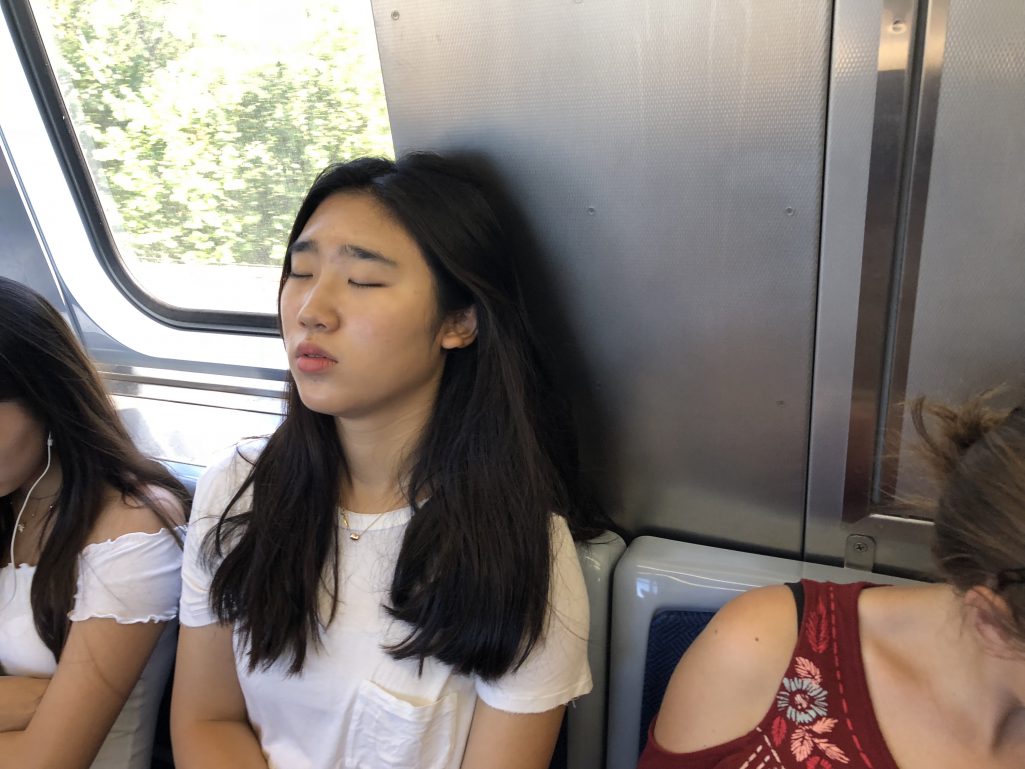 Jenny Huh takes a nap while riding the L back from the media outlet field trip. She said she woke up only two minutes before a trend story interview. Photo by Jacob Fulton

Olivia Demetriades of Winter Park, Florida, entered the L train, balancing her phone and notepad as she headed for a corner of the noisy train car. A source for her trend story was available only during the ride back from Chicago, and she had to conduct the interview on the train.

“Pay attention and try not to schedule interviews on the train if possible,” Demetriades said. “But if it happens, know that you’ll be able to make it happen and make it work.”

Demetriades was not the only cherub who had an unconventional experience on the “L.” Although cherubs used the train only for Chicago field trips, they had a variety of experiences during their time in transit.

Yalda Khodadad of Los Altos, California, said a stranger was talking to her about how she plays piano and went off on a tangent about voice lessons.

“He said he was the best voice teacher in Chicago, and told me, ‘You have God’s talent,’” Khodadad said. “Don’t engage, especially if you are on a short time limit.”

Other cherubs echoed her advice for dealing with friendly strangers.

“Sit next to someone who looks kind and harmless,” said Eve Gross-Sable of San Diego, California. “It’s better if you’re sitting next to a kind and harmless person than if a dangerous or potentially harmful person sits next to you.” 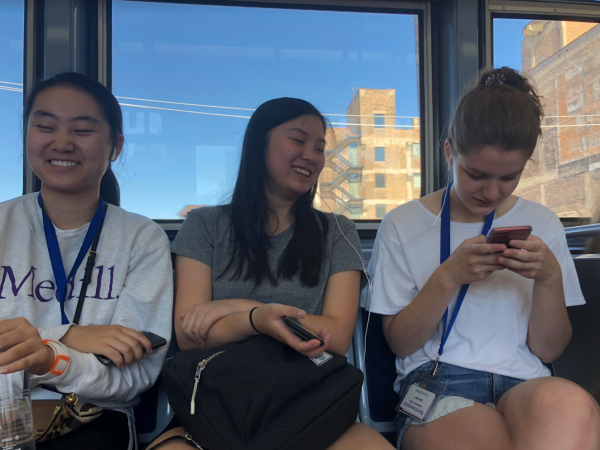 Linda Shi (left), Grace Deng (center) and Abby Banks (right) sit together on the L on their way to a visit at the Chicago Sun-Times. Photo by Delaney Nelson

Cherubs didn’t have unusual stories only about strangers. Ilana Arougheti of Cherry Hill, New Jersey, said she was momentarily separated from her group after a Cubs game.

“We all walked out of the stadium together and we were walking down the street and I was really thirsty,” Arougheti said. “I bought a bottle of water on the side of the street and then the cherubs were gone.”

She said she stayed calm and continued to the train station but almost got on the wrong train. Soon after, she found her instructor group. She said this experience taught her a lesson.

“For future cherubs, I would advise you to buy your drinks at the stadium, because it gets really chaotic outside Wrigley Stadium after a game,” Arougheti said.

Cherubs also used the train ride to catch up on their sleep. Jenny Huh of Rancho Palos Verdes, California, said she fell asleep on the train twice and would recommend it to others, as long as they’re in a group.

“It’s actually really nice,” Huh said. “You hear the train rustling and it moves really smoothly side to side and you hear people chattering.”

However, Huh said that one of her naps almost caused her to miss an interview scheduled for the train ride. She said she would avoid doing an on-the-L interview if possible, because it made her anxious.

“I had to hold my computer in one hand and I had my phone which was recording with TapeACall,” Huh said. “It was an interesting experience, but I wouldn’t want to do it again.”