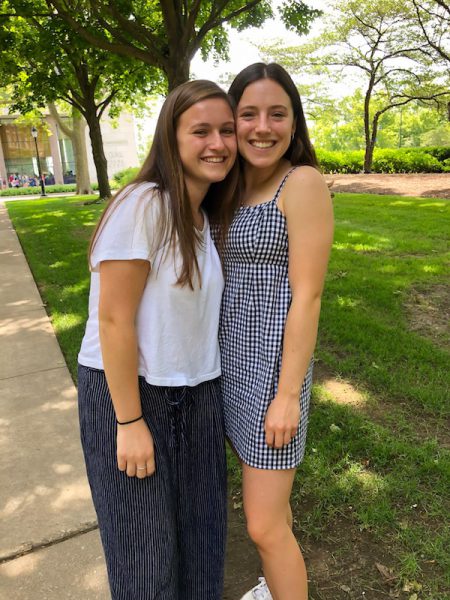 Maddie Aitken and Rachel Carlson pose for a photo outside Fisk Hall. Photo by Sophia Deluca

Rachel Carlson is from Los Angeles and I am from Montclair, New Jersey. There are 2,777 miles and a whole lot of America between us. If not for the Medill cherub program, we never would have met. And if we hadn’t met, I wouldn’t have found my platonic soulmate.

After Rachel and I discovered that we both love “Little Manhattan,” a widely unknown movie chronicling a sixth grade love affair and featuring 13-year-old Josh Hutcherson, aka Peeta in “The Hunger Games,” I knew we would be friends.

My belief faltered only once, when I was eating dinner in Allison Dining Hall on the first day and mentioned that avocados are one of my favorite foods. Rachel turned to me, astonished, because she thought we didn’t have them on the East Coast. I had seen us becoming friends, but now I was judging her. Hard.

But don’t worry. We moved past this incident and I explained to Rachel that you can, in fact, enjoy avocados even if you’re not from California.

We then connected over more pop culture gems like “The Office,” “Moonrise Kingdom,” “The Great British Baking Show” and Harry Potter. We are also both mildly (OK, very) obsessed with Timothée Chalamet.

I’m a die-hard “Gilmore Girls” fan, but I rarely meet people who watch it. So needless to say, when Rachel told me she loves the show, I freaked out. On the more intellectual side, Rachel and I both love Virginia Woolf and David Foster Wallace, even though I made fun of her for carrying his 1,000-page “Infinite Jest” in her backpack.

Both our respective friend groups from home call us “bean.” One Sunday during Write Off, we realized both our first crush stories involved Harry Potter. Neither of us can walk by a dog on the street without stopping to pet it, and we have the same biggest fear (in case you’re wondering, it’s abandonment). We both make lists for everything and hate feet.

In the past five weeks, Rachel and I have said the same thing at the same time more times than can be considered normal, and our friendship has become almost telepathic. Half the time Rachel knows what I want before I know I want it, and when we make eye contact in a group of people, I can tell what she’s thinking.

When I look at Rachel, it’s almost like I’m looking at myself. I’ve learned to listen to her advice because it’s what I would tell myself to do, and after a tough day or an awkward moment, she knows how I’m feeling because it’s how she would feel, too.

Rachel and I consider ourselves platonic soulmates. I think a soulmate is someone whom you believe you were destined to cross paths with and whom you cannot imagine life without. Even after just five short weeks together, that’s how I feel about Rachel.

In our last few days, I’m struggling to come to terms with the fact that we’re no longer going to live a few feet away from each other and be able to spend nearly every waking moment together. But I know that even from 2,777 miles away, we’re going to be thanking the Medill cherub program for bringing us together.