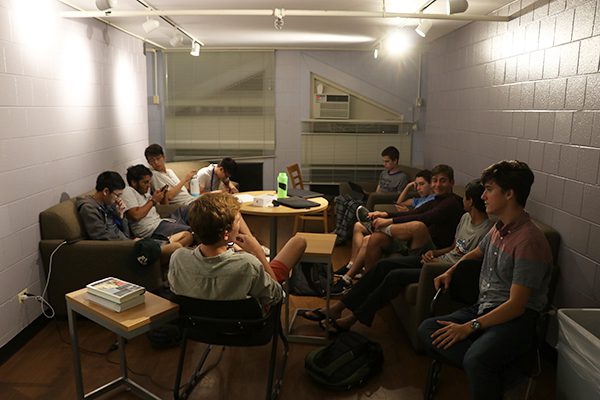 Floor 3 cherubs socialize in the lounge shortly after midnight. Photo by Zach Newman

During the day, Floor 3 is quiet and serene. Illuminated by soft light from the windows, the common lounges of the guys’ floor contain a few cherubs working, talking in muted tones and napping. But at night, when floor-only hours begin at 11 p.m., the tranquil dorm transforms into a vibrant community.

A typical Floor 3 night begins with all 18 cherub boys in the floor lounge together. The “early” part of the night includes our singalongs — four of the guys, including me, can play guitar. The results can be hilarious. A rendition of Queen’s “Bohemian Rhapsody,” for instance, led Sameer Shaikh of Bethesda, Maryland, to bang a garbage bin repeatedly to simulate drum fills as the whole floor screamed in unison, “Mama, didn’t mean to make you cry!”

Also essential to the “early night” Floor 3 experience is ordering food delivery — usually at least four pizzas from Papa John’s Pizza. When paying, we are forced to painfully split the bill as a group, which requires complex, mathematically questionable three-way cash transactions between cherubs. The ordering process can be frustrating, but once we get the food, it feels like an intimate party among lifelong friends.

Around 1 a.m., some of the boys leave to sleep, while others begin intense games of 8 Ball Pool through iMessage. As 2 a.m. grows closer, the mood changes. The pace slows. The conversation becomes a little quieter and a little more personal. This is the beginning of the mellow second half of the night.

By 3 a.m., a core group of five emerges. One night, we watched the bizarre “Eric Andre Show” for hours. The CAs visited the floor when the viewing session began and couldn’t understand why we thought the show was funny. They came back two hours later, and by then we were all delirious from a combination of our exhaustion and the show’s surreal humor. It wasn’t getting any funnier, but we were all laughing so hard that it hurt to smile.

On the night before the trend story was due, Jason Beeferman and I were the last to fall asleep. We finished our articles at 4 a.m. and then relaxed in the lounge for an hour. There’s a certain beauty to being awake in the moments when the rest of your world is asleep. As I recovered from an intense week of reporting, I thought about these great friends and how much I would miss these late nights when I returned home.

I was afraid when I came to this program that I wouldn’t meet anyone who liked sports, music, comedy and journalism. But to my delight, the cherubs on Floor 3 wanted to talk about the NBA for hours, sing until our voices gave out and watch “The Eric Andre Show” until we couldn’t think straight. In the end, staying up every night was worth it, 100 percent. And although I fell asleep occasionally between morning classes and lunch, I wouldn’t have it any other way.