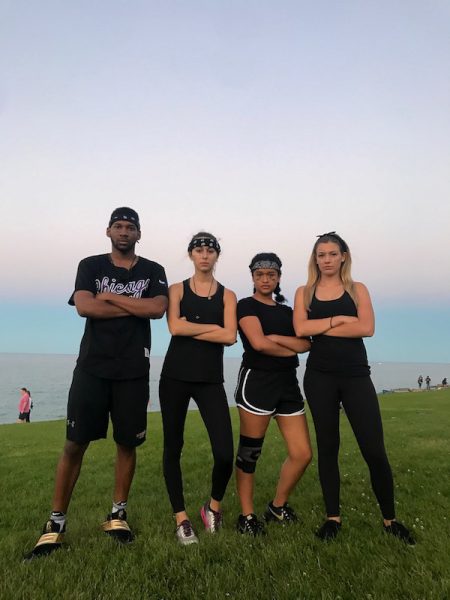 That’s exactly what the community associates, better known as CAs, experience in the program. Every year, two to four former cherubs — who have just finished their first year at Northwestern — live in the dorm and help the incoming high school journalists as mentors and friends.

Northwestern News Network reporter Amanda Rooker said returning to the place where she grew journalistically and as a person brought back the time she spent in 2016 with her “79 brothers and sisters.”

“There’s that sense of nostalgia of us being together and getting to have that friendship back again at cherubs,” Rooker of San Clemente, California, said.

The opportunity to relive the traditions of cherubs is a “dream come true,” according to Gabby Birenbaum, who was able to immerse herself once again into the fun of Cheraoke without having to worry about the stakes of the game.

“The idea of creating the experience I had for 84 people and helping them have that amazing summer sounded like such a good opportunity,” Birenbaum, a web editor for The Daily Northwestern, said.

Birenbaum, of Arlington, Virginia, said becoming a CA gave her the opportunity to view the program from a different perspective and to acquire a new appreciation for everyone involved with it.

“It’s interesting to see the sides we didn’t see before,” Birenbaum said. “Seeing how much work the staff puts into everything and getting to see the work we put into all the activities pay off has been really rewarding.”

The most integral part of having CAs on campus is their ability to be mentors and friends to cherubs, being only two years older said Lily Grossinger from Philadephia, Pennsylvania.

“They are not that much older than us but they have a more refined perspective on everything,” said Grossinger.

Similarly, Sophie Stephens from Coralville, Iowa, said it is reassuring to know the CAs can relate emotionally to the cherub experience — the struggle of getting an interview to the joy of completing a story.

“It’s nice to have that connection with them,” Stephens said. “They know what we are going through.”

Because the program has been around since 1934, it honors certain traditions. But each year the CAs try to infuse their own creativity into the activities. This year, all four led a “Using Social Media in Journalism” lecture, a “Journalism Beyond Your High School Paper” workshop and one CA, Marissa Martinez of Chicago, led a “Diversity in the Newsroom” discussion.

“We wanted to have a more formative role in the programming itself,” The Daily Northwestern opinion editor Martinez said. “It’s good to stick with traditions, but it’s really important to pitch your own stuff and make the program your own.”

The Daily Northwestern sports reporter Andrew Golden of Reisterstown, Maryland, said the best part of being at cherubs again is to “watch all 84 of you guys grow” from nervous high school students to confident reporters.

The CAs said they would like cherubs to leave the program knowing they can take on any obstacle and thrive with the support of their new best friends.

“I hope they leave with amazing friendships, journalistic growth and with inspiration to take on challenges,” Birenbaum said.