Every Sunday cherubs can participate in clubs to learn and develop skills in different media platforms. Most cherubs take advantage of the optional sessions.

During their four weekends at Medill, cherubs can attend Show Off, Write Off, Code Off, Snap Off and Sound Off. Experience is not required. Willingness to learn is.

In Show Off, participants write, film and produce short broadcasts shown to all cherubs Sunday evening.

Eric Neugeboren of Bethesda, Maryland, participated in Show Off as a reporter, an anchor and a producer.

“I’ve grown to like it a lot more than I would have thought,” Neugeboren said. “Though I didn’t like seeing myself on screen, it was cool having a final product with me on it.”

Show Off instructor and Medill alumna Carlin McCarthy emphasized having cherubs create the entire broadcast. She encouraged students to experiment with new roles on the team.

Despite having no broadcast experience, Anna McNulty of New York City headed production during her first Show Off.

“It was kind of thrilling,” McNulty said. “I was at the edge of my chair. [It was] a completely new experience, but something I really wanted to do again, so I showed up the next week for Show Off on the production team.”

Cherubs who wanted more practice writing could attend Write Off. Instructors gave cherubs a new prompt to write about each week. Write Off gave cherubs a chance write in first person. They wrote about their first crush, quirky habits, the meaning or history of their names and what they did when life gave them lemons. Each Sunday evening, a few cherubs were chosen to read their writing aloud to all the students.

Melanie Lust of Westport, Connecticut, attended Write Off for three weeks. She wrote about her quirky habit, an obsession with classical music, and was selected to read aloud.

“I was really happy by how well people responded to it,” Lust said. “I had a few people after come up to me and tell about their weird music taste, so that was really fun. I ended up making a few friends that way.”

In Code Off, cherubs learned to use WordPress and were introduced to tools from the Knight Lab, a Northwestern team that creates different media applications. Code Off also introduces cherubs to different online platforms they can use to tell stories.

Jacob Strier of Scarsdale, New York, joined Code Off without experience. Strier learned to create his own website, which he developed into a personal portfolio.

“It was the first time I had ever heard about WordPress,” Strier said. “That day I made a WordPress account, and for the past few weeks I’ve been designing it and putting my articles on it.” 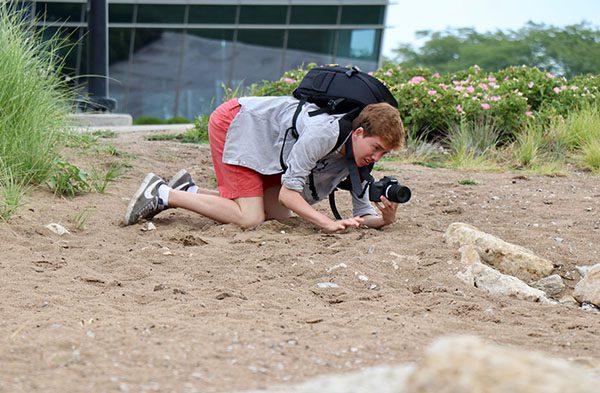 Dylan Carson-Sirvent took part in Snap Off during week two of cherubs. He said he enjoyed using a DSLR camera because it made him feel more “professional.” Photo by Roshan Fernandez

2018 cherubs were the first to experience Snap Off, the photography club. Instructor Mia Zanzucchi created the program.

“When I was a cherub in 2013, I felt like there could have been more opportunities for photography, especially because it’s such a versatile, useful skill to have,” Zanzucchi said.

At the start of each Snap Off session, Zanzucchi gave purposely vague photo assignments, such as “a photo that feels busy,” to allow interpretation and creativity. Cherubs would later reconvene to share and critique photos.

“I had never really done a ton of formal photography training,” said Abby Banks of Stillwater, Minnesota. “Once I came here, and there was a little more formal training, I thought maybe that would be nice to learn. It was fun to explore the more artistic side of photography.” 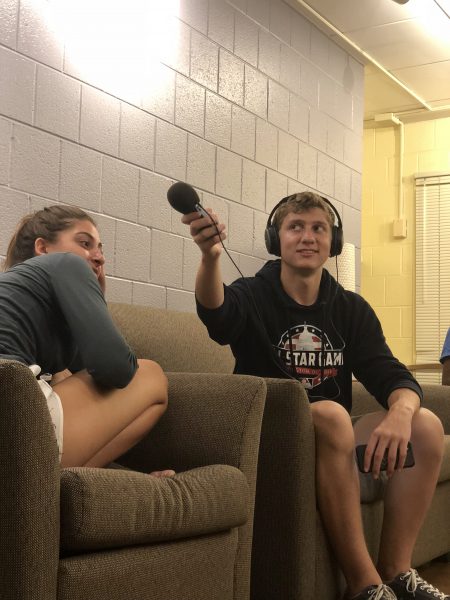 Will Kubzansky (right) records audio for a Sound Off project. Photo by Jenny Li

Guest instructor and podcast producer Lindsey Kratochwill led Sound Off for two weeks. Cherubs in this club recorded their own podcasts, then edited them using Adobe Audition.

Quan Pham of Hanoi, Vietnam, worked with Avery Maslowsky of Berwyn, Pennsylvania, on a podcast about dorm life. Pham had no experience with audio journalism and attended Sound Off to learn about it.

“I thought making a podcast would be easy because it’s just talking into a microphone and stitching it together,” he said. “But it’s not like that. There’s a lot of editing and thinking going into it.”

Visiting the WNUR station during a campus media tour reminded Will Kubzansky of Washington, D.C., of his interest in audio journalism growing up. He was inspired to sign up for Sound Off. In his podcast, Kubzansky covered a Chicago Cubs baseball game.

“I had a good time getting the nat sound from the game,” Kubzansky said. “There’s very few places where you can play two or three sound clips and know exactly where it is, so it was a cool place to record.”