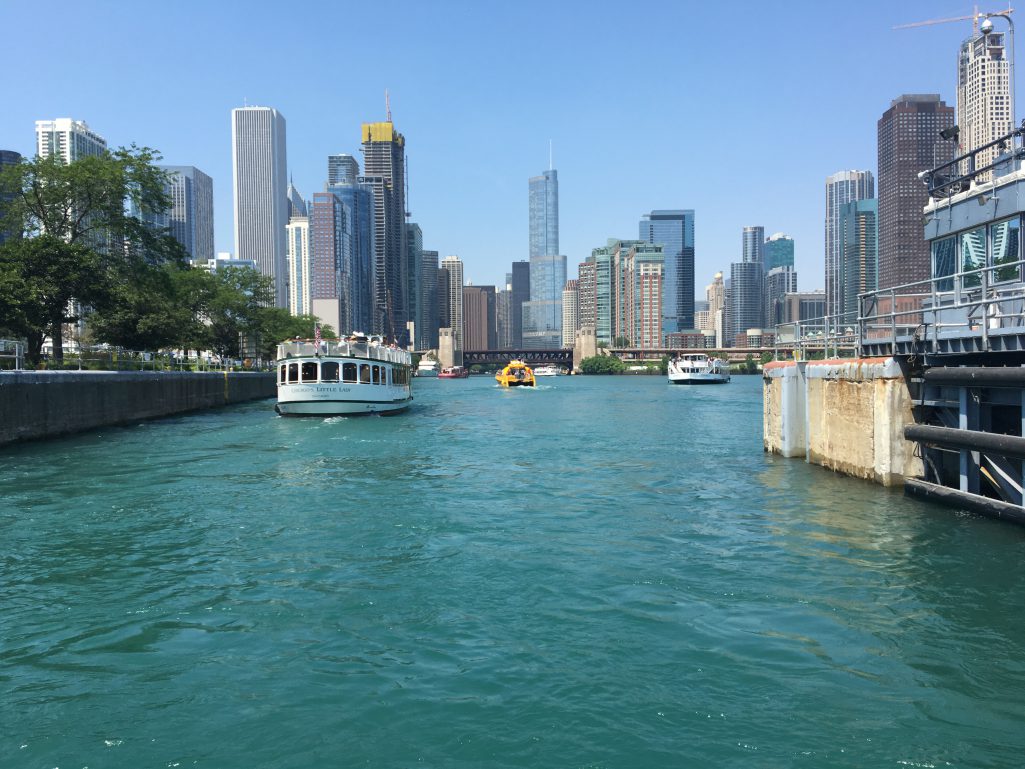 On July 13, cherubs traveled on an architectural boat tour on the Chicago River and Lake Michigan. To get to the lake, the vessel passed through the Chicago Harbor Lock. Photo by Roshan Fernandez

After two weeks of rigorous assignments, 84 cherubs arrived in Chicago for their first off-campus field trip.

Students took a 90-minute architectural tour on the Chicago River and Lake Michigan. They also visited the Medill News Service’s downtown newsroom, where they heard from Jane Hirt, the former managing editor of the Chicago Tribune.

Departing from a dock on Michigan Avenue, the boat traveled upriver to South Wacker Drive and the Willis Tower before turning around and heading to Lake Michigan. On the tour, cherubs witnessed many of Chicago’s architectural marvels including the Trump International Hotel and Tower, the Merchandise Mart and 875 North Michigan Ave., also known as the John Hancock Center.

For Linda Shi of Duluth, Georgia, the boat ride was her introduction to the city. 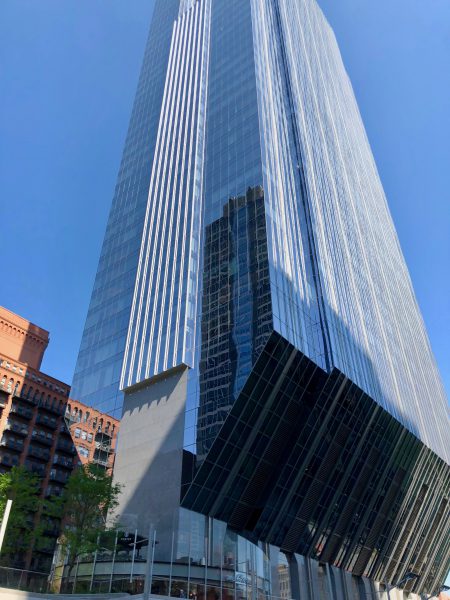 Cherubs saw 150 North Riverside Plaza during a boat tour. The building was designed to allow trains passing underneath. Photo by Drew Schott

“This was my first time in Chicago,” she said. “I loved the tour because it gave us a great overview of the architecture and an interesting way to see the buildings.”

The experience was familiar for Andrew Rowan of Cherry Hill, New Jersey, because he had taken an architectural boat tour on his previous visit to the Windy City. But he said he still enjoyed viewing Chicago from the unique perspective of the river.

“I’ve always liked big cities,” he said. “It was cool to see how Chicago is interrupted by a giant river. Also, I loved seeing all the bridges and the trains going over them.”

Quan Pham from Hanoi, Vietnam, said he was captivated by the city’s architecture, especially 150 North Riverside Plaza. The high-rise, designed by Goettsch Partners and Magnusson Klemencic Associates, looks like a giant overturned glass bottle, with a narrow foundation widening over the first eight floors and then rising into the sky.

To enter and exit Lake Michigan, the boat stopped at the Chicago Harbor Lock. Controlled by the U.S. Army Corps of Engineers, the lock reverses the flow of the Chicago River and increases the water level from 2 to 5 feet. Pham called the perspective of the city from the lock the “most beautiful view” of the tour because “we were far enough to see the skyline, but close enough to take in the architecture.” 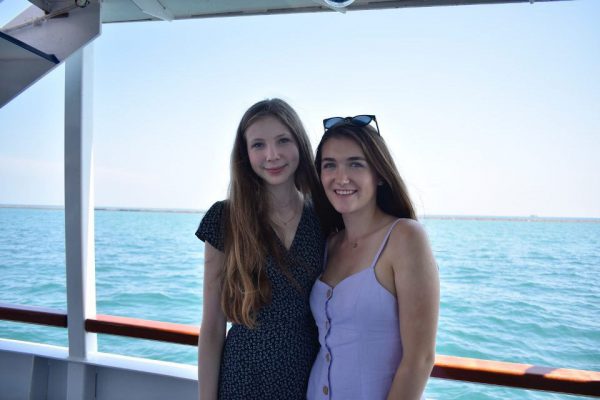 Kaitlin Musante (left) and Annalise Myre (right) smile together during the boat tour’s venture out into Lake Michigan. Photo by Sophia Saker

For Alex Dangas of New York City, the boat’s tour guide made the journey special by noting the history of each building.

“It wasn’t just pretty pictures,” she said. “He had stories to entertain us. Clearly he was enjoying himself, which made him easy to listen to.”

After the boat ride ended, cherubs grabbed lunch before walking over to the Medill News Service’s newsroom, home to Northwestern’s graduate journalism program. Current grad students showed the cherubs around, but not before hearing from Jane Hirt.

Hirt, a graduate of the University of Nebraska-Lincoln, began interning at the Tribune in 1990 and rose to the position of managing editor before retiring in 2014. She spearheaded the creation of RedEye, a publication geared toward Millennials.

Hirt spoke about various journalistic topics, including the expansion of digital media. A takeaway for Shi was the importance of curiosity.

“I remember her pointing out the window at construction workers during the lecture and saying she wondered what they were doing,” she said. “The fact that she took the time to point that out proved the essence of curiosity in her and showed how curiosity helped carry her during her career.”

Ilana Arougheti, another cherub from Cherry Hill, New Jersey, appreciated hearing from a veteran journalist who had served in various positions at one paper.

“She was very well-informed, and it was cool to see how someone in journalism could reach such great heights,” she said. “Also, regarding RedEye, I liked her insights about a niche market and how to find an angle that caters to an audience.”