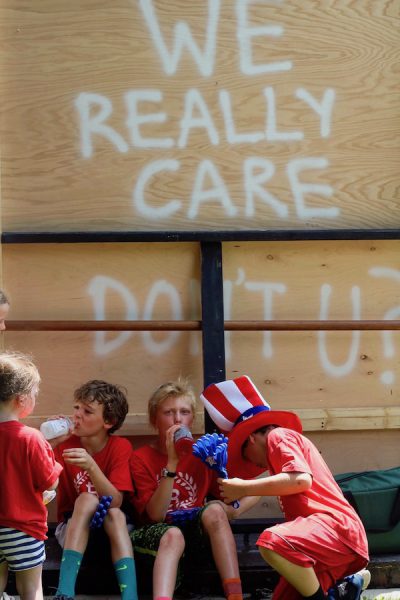 Evanston children from The Backlot, a private park surrounded by homes, lean against the last of their community’s floats at the Fourth of July parade. Halsey Smith wrote an article on this community and their participation in the event. Photo by Halsey Smith

Cherubs endured the beating sun, miles of walking, and the challenge of finding a unique story July 4 when they set off to interview people at Evanston’s annual Fourth of July parade.

The parade theme was “Inspired By Our Diversity,” and many cherubs wove the theme of political or multicultural diversity into their stories.

Jane Forman of New York City was intrigued by the colorful costumes of one group and looked closer. “They were dressed extravagantly, wearing feathers on their heads,” Forman said. “They had beaded outfits. Everything was neon. They stood out.”

Forman said the group was an Evanston samba dance troupe whose members stressed the importance of celebrating other cultures. To find an angle for her story, Forman interviewed group members as they prepared for the parade. Her story’s angle materialized from the interviews.

Halsey Smith of Grand Rapids, Michigan, was searching for a story when a group wearing matching shirts caught her eye. The group was preparing for the parade at the staging area. They belonged to a small community called the Backlot.

“It’s a small community of houses that are all connected by a secret park, a private park, that only they can access because it’s surrounded by their houses,” Smith said.

“I interviewed three people in a row, and I’d seen some other cherubs go over there for one quick interview, but I thought you wouldn’t get the whole story if you didn’t interview multiple people,” she said.

The Backlot has participated in the parade for decades, building floats in their shared backyard and using them in the parade. Smith got these details and others by interviewing Backlot members from different generations, including grandparents and their grandchildren.

Anya Tullman of St. Louis said she interviewed and profiled a bank teller who was selling lemonade. The parade gave her a chance to work on her interviewing skills and deal with rejection.

“Some people told me they couldn’t talk to me,” Tullman said. “In school, I always had interviews set up with people, but cherubs gave me a lot of confidence to trust my abilities and go up to people and have a conversation with them. If I had the same assignment today, I’d do it a lot better.”

Cherubs advise arriving to the event early before sources hustle into the parade procession.

“The instructors were suggesting we go to see where people were getting ready,” Smith said. “That’s where I got my interviews.”