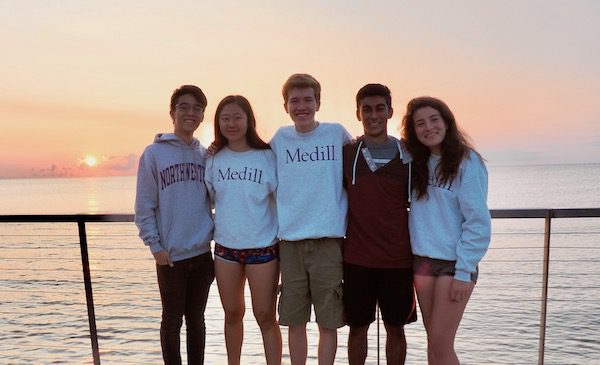 In the beginning, to be honest, conversations were mostly small talk. During the first week, they began with phrases like, “Remind me what your name is,” and “Where are you from?” The conversations would end 15 seconds later.

That is, until The Bug Bite.

I didn’t even feel it when the unknown insect attacked me. But when I woke up on the morning of July 10, there was a huge bump on my forehead. To be exact, it was three and a half inches, according to Dr. Lori Schwarcz from Northwestern University Health Services.

Some cherubs described it as “an enormous egg” or a “golf ball.”

In the beginning, it was embarrassing. Resting my hand over my forehead, I hoped to subtly hide the lump from sight. But after half a day, I realized everybody had already noticed The Bug Bite. It was inevitable, and I figured I should just accept it.

And after that, things began to get better. I started laughing with everyone else. I must have had about 40 conversations that began with “Oh, my God, are you OK?” But I didn’t mind because the talks never ended there.

Weirdly, The Bug Bite became a great conversation starter. Everyone joked about it and then moved on to other things. The Bug Bite lasted a couple days and then faded, but the friendships that formed because of it didn’t.

Now I spend time with those people every single day, and honestly, they are the reason this was such a great summer.

So at the end of the day, yes, The Bug Bite was unusual. But if I could go back in time, I would hope for the the exact same bug to bite me again.