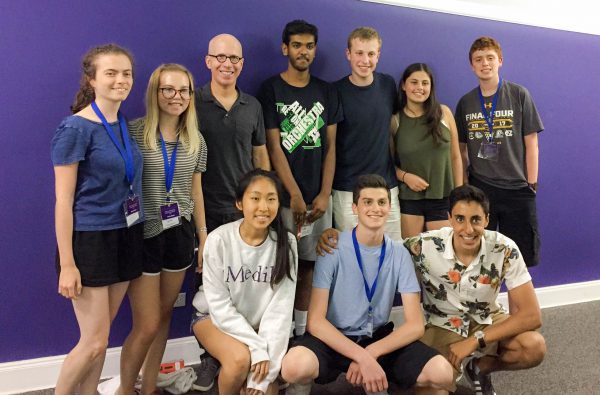 Whether it’s learning about international reporting, writing reviews or starting your own tech company, cherubs found workshops that resonated with them.

Although Meghan Hayfield of St. James, New York, had never shot or edited video, attending a short documentary workshop opened her mind to the idea of making films and documentaries.

“It was harder than I thought, but the payoff was even greater than I expected,” Hayfield said. “It was one of my favorite experiences. I realized that instead of just watching documentaries, I could be making them.”

Workshops throughout the five weeks helped cherubs explore different areas, such as sports.

Evan Kolin of Bloomfield, Michigan, said it was surreal to hear how Jonathan Eig spent years tracking down sources and stayed in touch with them to write “Ali: A Life,” a biography about the legendary boxer Muhammad Ali.

“He didn’t take no for an answer,” Kolin said. “I learned from him to be persistent and to go as far as you can to get an interview.”

In the workshops, cherubs also merged their interests and hobbies with journalism to get a better idea of how they could incorporate these skills in their careers.

“I’m really interested in economics and journalism,” said Emma Sollenberger of Marietta, Georgia, who attended a session on covering money. “The two blended together. It was learning about personal finance and financial issues people are interested in.”

For other cherubs, the workshops offered a new experience and a challenge.

During a session on TV news editing, Aro Majumder of Austin, Texas, reported a short news piece on camera and also worked behind the camera.

“It’s not something I’ve done before, so it’s fun to get the experience of having to say stuff on the spot when you don’t have any script or teleprompter,” Majumder said. “While I’m still learning a lot through writing, it’s more fun to do some broadcasting because I don’t get the opportunity to do it anywhere else.”

Eryn McCallum of Chicago gave her taste buds some new experiences at the “Writing about Food” workshop, sampling different foods and writing about their flavor and texture.

The exercise taught her to pay attention to details, she said, because she needed to consider the most effective way to describe a food to a reader who had never tried it.

“You have to get used to trying things you wouldn’t usually try because a part of the job is being willing to take the risks that will help you get a good story or help you learn how to write better,” McCallum said. “It’s important that you’re exposing yourself to things outside your comfort zone.”