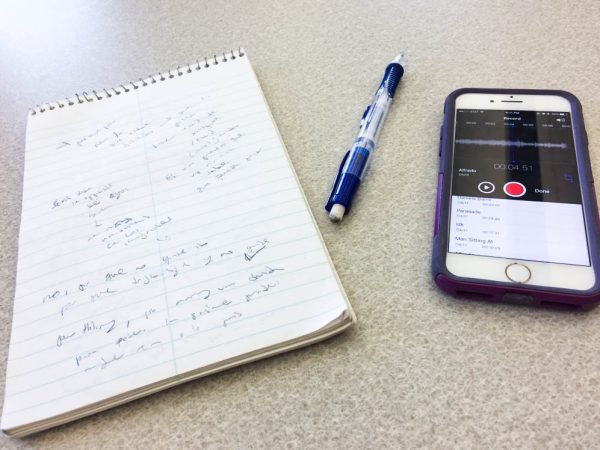 When I walked into the Evanston CVS the day before our first real story was due, I still needed to interview at least one more local resident about whether the Democrats might be able to regain control of the House in the 2018 election.

But that wasn’t at the front of my mind. No, my priority was replacing my broken phone charger, ASAP. As I examined the pharmacy shelves, a CVS employee turned into my aisle.

Middle-aged and Hispanic, he immediately caught my eye. He looked like someone who might perfectly balance out my other sources — an elderly barber and a young biology student.

On a whim, I introduced myself, explained my assignment and asked if I could interview him.

In broken English, he told me he didn’t know much about politics. He asked for my name again. “Carmen,” I told him. His eyebrows bent toward each other. “Habla Español?”

“Yes, of course I speak Spanish,” I reassured him.

As he reverted to his native language, he told me that he didn’t feel comfortable speaking on the record in English. Could he do the interview in Spanish, and let me translate it later?

I hesitated. Spanish was my first language, but after 17 years living in the United States, I had set it aside for use primarily among family and friends. While I was proud of my cultural heritage, I’d never used it professionally.

At first, I said I didn’t want to risk editorializing in my translation. But when he clearly became uneasy once more, I gave in.

My sentences and conjugations were halting, and my tongue stalled as my mind grappled to catch up with the sudden language switch. But by putting myself in an uncomfortable position, I found he was able to speak much more freely, and what he told me about his fears for himself and his family as a Mexican immigrant under a Trump presidency ended up becoming my lede.

I always knew that Spanish would be useful. It was the mantra my parents repeated every time they feigned spontaneous bouts of deafness if I tried to respond to them in English, or when they dragged me kicking and screaming to a weekly language class. But before cherubs, I never realized how much of an advantage it gave me. The window of perspectives I could get grew wider. When I wrote my trend story on medical tourism, I interviewed a doctor at an international hospital in Colombia for nearly an hour in Spanish.

My grammar wasn’t perfect in either interview, but I realized what was most valuable about both experiences. It wasn’t that my verbal skills were flawless. It was that I was able to listen— and connect— in the most authentic way possible.