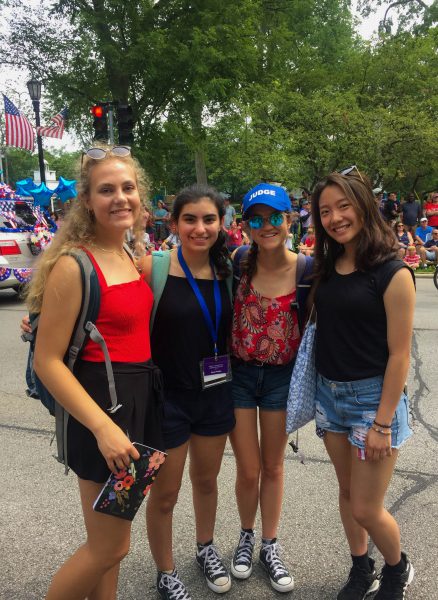 It took seven interviews, a conspiracy theorist and a cloud of cigar smoke blown in his face before Sam Heller found a story at Evanston’s Fourth of July parade.

“I had a lot of trouble deciding what I would write,” Heller said.

The students were tasked with writing a color story about the parade. Some cherubs enjoyed the experience, but others were frustrated by it.

Heller fell into the frustrated category, at least at the beginning. The New York City resident hustled an insurance salesmen. He talked to a conspiracy theorist who handed him a 40-page packet explaining how 9/11 was an inside job. He talked to a restaurant owner who blew cigar smoke in his face.

“Nothing gave me a story I felt good about until I went into a coffee store that was open and asked if I could interview the manager,” Heller said.

Heller wrote a story about why some businesses were open during the parade. The manager of the coffee shop employed underprivileged students and wanted them to see the parade. Another business was showing off its new bar.

“It was a stressful but rewarding experience,” Heller said.

Saira Singh, of La Cañada, California, said that covering the parade was fulfilling.

“The story before, I had gotten rejected over and over for politics,” Singh said. “So to have the exact opposite where instead of getting rejected, I was getting sought after and people were coming up to me with stories was encouraging.”

“It was a lot easier to talk to strangers there because everyone was in good spirits, and they were pretty open to talking to me,” Foronda said.

Although the day was tiring and demanding, most cherubs said they learned from it.

“Don’t doubt yourself,” Heller said. “Feel confident in whatever path you choose. If you feel confident in going up to strangers and asking them anything, it will be a much easier experience.”