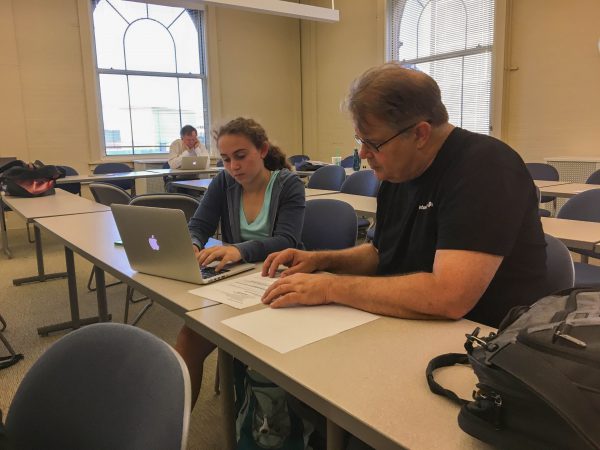 Cassidy Wang spent her first interaction with her instructor, John Kupetz, talking about movies. When he asked about her favorite movie set in her hometown of Boston, Massachusetts, she said, “Goodwill Hunting.” He told her to pick a better one and she answered, “Spotlight.”

Cherub instructors come from backgrounds that range from hard news to magazine profiles. Each instructor has a group of about 10 students and is able to foster close relationships by giving thoughtful feedback.

“The relationship you form with your instructor is one of the reasons this program has such a lasting impact,” said Wang. Wang’s instructor was John Kupetz, an instructor notorious for his indecipherable handwriting and green pen.

Bryan Edwards of Parkland, Florida, said it was great to have a younger instructor. His instructor Alex Duner, a recent Medill graduate, may not have had the same levels of “wisdom,” as some of the older instructors, but Edwards said his knowledge of technology was helpful and interesting.

“He could understand my position more and it seemed easier for him to understand why I was writing the way I was,” he said.

Edwards said his editing relationship with Duner helped him grow.

“He’s helped me focus on important aspects of the story that make it important for the audience,” Edwards said. He added that his stories have become more concise and his quotes are deliberate and more abundant.

Edwards advises students to be open to instructors’ criticism. “If you don’t take criticism personally and you really take the chance to improve your writing, you’ll see results,” he said.

Wang recommends frequent conversation. “With John specifically, talk to him whenever you see him,” she said. “One of the things I’ll miss the most is seeing him in Fisk and being able to strike up a conversation about anything. I loved talking to him about ‘Spotlight’ and hearing his analysis.”

Rachel Schonberger of Weston, Florida, said she plans to stay in touch with her instructor, Karen Springen.

“I thought she was a good fit for me because I’m very interested in entertainment writing,” Schonberger said. “She was knowledgeable about all the work I wanted to do.”

Instructors are also great resources for potential sources. Schonberger said Springen was especially helpful in thinking of people to interview for her trend story.

“My first impression was really bubbly,” Schonberger said. “She seemed like she was really passionate.”

Edwards, Wang, and Schonberger agree that their instructors supported their ideas and were always encouraging with their feedback.

“After every meeting, I felt proud of my work that she discussed with me,” Schonberger said.