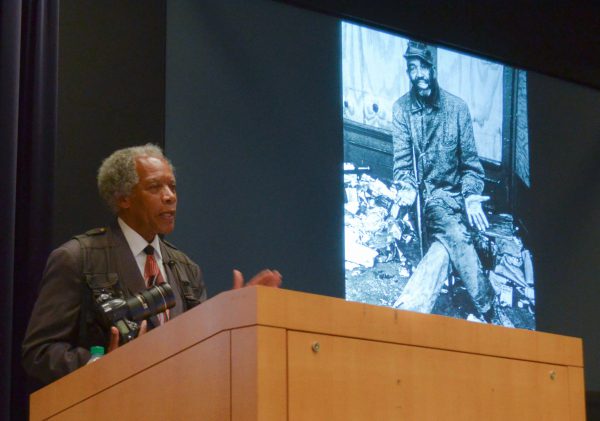 Chicago photojournalist John White urges the cherubs to fly above the clouds. Photo by Rachel Barber

Pulitzer Prize winning photojournalist John H. White delivered the cherubs’ final guest lecture, showing more than 100 photos he has taken, handing each cherub an autographed photo and teaching about the importance of humanity in journalism.

White also shared photographs of and stories about such historical figures as Muhammad Ali, Nelson Mandela, Rosa Parks, The Rev. Jesse Jackson and Barack Obama, many of whom he considers to be good friends.

Cherub Max Hayes of Lake Forest, Illinois, said, “They saved the best for last. You are going to want to remember a lecture that is more going to help you through life and not just a specific part of journalism, and this will reside in my mind for a while.”

White used his photos to communicate a greater message than just teaching about the specifics of photojournalism, Hayes said. Rather than teach what other lecturers had taught them throughout the program, White focused on the human aspects of journalism and spoke to why it matters.

“If you don’t do it, who is going to do it?” White asked. He went through a variety of his photos and talked about their relevance to him or gave a lesson to take away. Cherub Jilly Rolnick of Hillsborough, California, said she liked the photos and stories of Ali.

“I enjoyed how he was able to relate photojournalism to lessons we can use outside of the photojournalism field,” she said. White also addressed the importance for each cherub to go into a career that helps humanity, whether it is journalism or not.

“The world is bigger than you, not better. What you do and think matters. There is only one of you,” White said. One hundred fifty years from now, he said, we all will be dead, but the work we do will continue to live.

“One thing that really stuck with me was the ‘heartbeat of life’ and how he feels like it is his duty to go out there and serve people with his photos,” Hayes said. Hayes and other cherubs, such as Zach Cherkas of San Mateo, California, took notes that they said were completely different than what they would usually take.

Both said White was spewing important quotes. To Hayes, the most important thing White said was the “three F’s.”

“I am going to give you the gift of three F-words: Faith, Focus, and Flight,” White said while showing a photo of a bird flying above the reflection of a rainbow off a lake. White said he wants each person to be faithful to themselves, be able to focus on what is important, and “keep in flight.”

After saying this, White gave each cherub a pin that said “keep in flight” and a signed copy of the photo he was presenting.

“He was really genuine,” Cherkas said. “He was really passionate about what he was doing. It was so much less about journalism and so much more about life.”