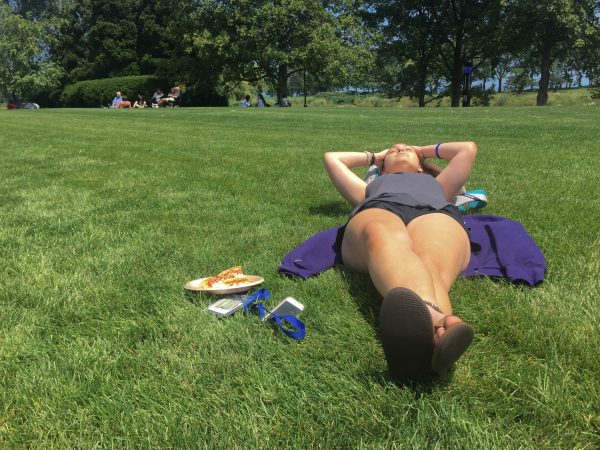 Sabrina Martin relaxes on the grass during lunch. Photo by Mona Murhamer

Sabrina Martin has the most contagious laugh I have ever heard.

It has made me double over in a fit of crying laughter at least five times since we’ve been here.

As I write this, we’re sitting in a completely silent room, and I am recovering from bursting out into uncontrollable giggles because we, in one of our telepathic moments, found the same thing funny, and she just looked at me.

This happens a lot. The telepathy, I mean.

When something funny happens in an uncomfortable setting, Sabrina looks at me and silently begs me to crack a joke so that she can laugh.

When we play Cards Against Humanity, I know which white card she’s placed in the pile before she claims it at the end.

When I am asked if Sabrina is asleep, I know to respond with, “She’s probably in bed watching ‘Prison Break’ alone.”

We know when the other will be in the bathroom at night brushing her teeth, and we’ve stayed in there until 2 a.m. dancing and laughing.

I’m not quite sure when we became as close as we did, but I know the first thing I ever said to her was, “You can use my laptop to buy plane tickets,” to which she said, “Why would I use your laptop? I brought my own.”

From there, we were described as “inseparable” and identified as “you and the other one.”

When I first got here, I was expecting to be inseparable with my roommate — not a girl who holes up in her messy, freezing-cold single room every night to watch Netflix after spending the day camped out at the Starbucks in Norris, guzzling down as much caffeine as she can.

Who else would scream with me after a day of not getting enough sources? Who else would watch inspirational TED Talks to motivate me through the end of my trend story?

On the first day at cherubs, they tell you you’ll make lifelong friends at cherubs. I was skeptical until I met Sabrina. We live on completely opposite sides of the country. But something tells me even after we leave cherubs, she’ll be making me laugh from 2,824 miles away.