The shore of Lake Michigan, just a three-minute walk from the dorms and the journalism school, is dotted with dogs, sunbathers, volleyball players — and cherubs. 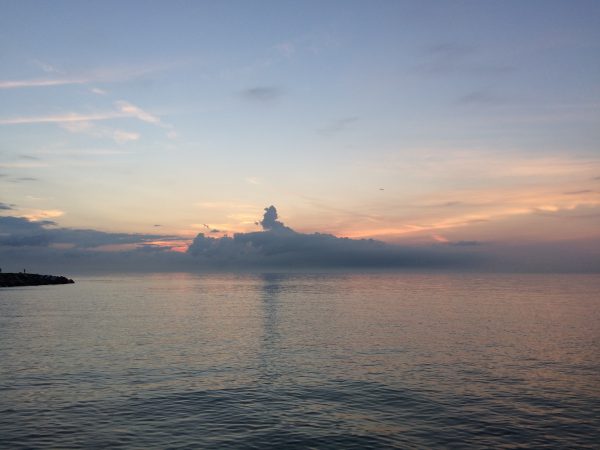 Cherubs often wake up early to watch the sunrise. Photo by Anne Pritikin

The shore and grassy Lakefill — a man-made expansion of the campus on the lake — provide ample space for swimming, Frisbee, volleyball, football, sunbathing and Spikeball. (To play this popular college game, two-person teams slam a ball into a net to make it unreturnable.)

“We usually have a steady rotation at the beach. So we’ll Spikeball for about 30 minutes or so, and then we’ll go swimming in the lake to cool off, and then we’ll do it about five more times,” said Max Hayes of Lake Forest, Illinois. “It’s a good way to spend a Saturday.” 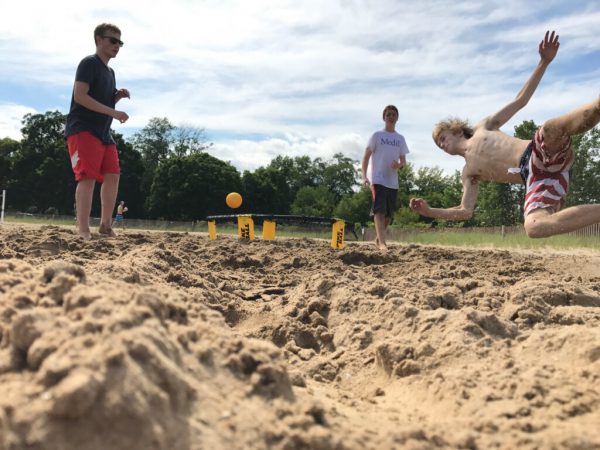 Cherubs gather at 9 p.m. on the Lakefill grass to watch the fireworks over the lake.

“It was very pretty because I liked being able to see the contrast of the fireworks on top and the light shining on the lake,” said Olivia Cohen of Chapel Hill, North Carolina.

The 82 cherubs, divided into eight instructor groups, arrived in the evening at the Lakefill to compete in tug of war, dizzy bat and wheelbarrow racing with the backdrop of the sun setting over the city.

“The lake provided great scenery because we could look out on the water as were struggling to pretend to be athletes, and it also provided for great cool weather as we sweated our little hearts out,” said Sarah Fernandez of Las Vegas.

“About five or six times I’ve been on a run around the Lakefill. You’re completely wiped out, and you see this great view of just being alongside the water, and that’s just unlike any other run I’ve been on.”  — Sam Heller of New York 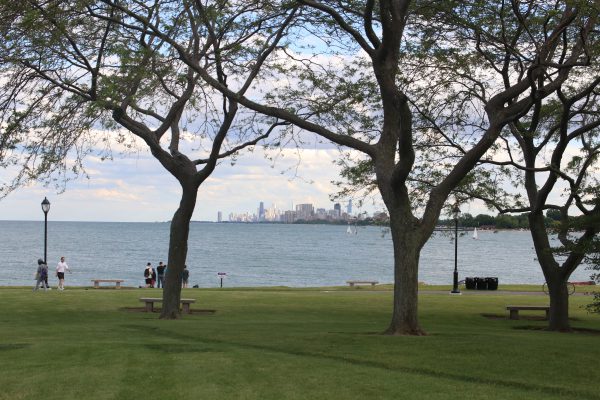 A view of the Chicago skyline is visible from the Lakefill. Photo by Danny Vesurai

“We came across this boat painted like a watermelon, and I literally thought it was just about the cutest thing ever. It was super summery and encapsulated the happiness and completed the picture of what the lake truly means to me.”  — Jilly Rolnick of Hillsborough, California 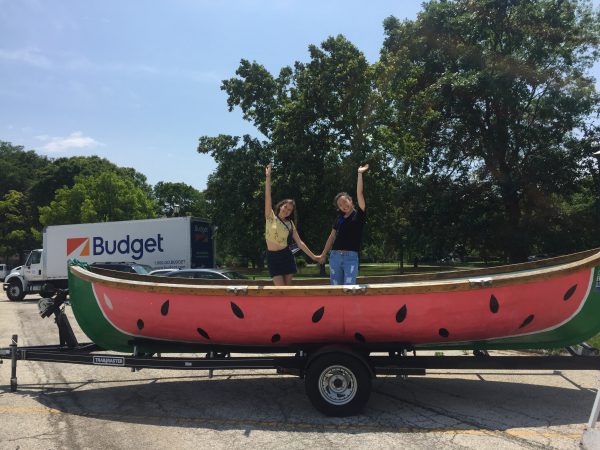 “This one night we just played volleyball on the grass barefoot. This was also the night before the Fourth of July, so we started hearing fireworks. Immediately we ran to the bridge on the lake and sat down and watched the fireworks. It was a great ending to our night.” — Allison Ugarte of Miami

“We went there once for sunrise. Oh, my gosh. It was so early, and we were all so tired. It was a magical moment. There were a couple clouds, but it was OK because they were highlighted by the colors. The clouds covered the sunrise, but there was a little burning ball of fire that we could see from behind the clouds.” — Kayla Guo of Long Island, New York 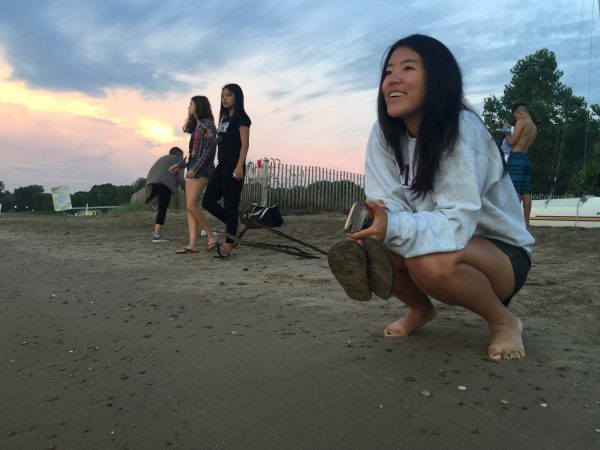 Kayla Guo squats on the shore watching the sunrise. Photo by Joan Gwak

“Once I finally jumped in and felt the water hit my face, it was like nothing I’ve ever experienced before. The sand here, you’d think we were in Jamaica when you’re on this beach. Just the sand, so smooth, almost fluffy. You like when it gets stuck to you when you’re all wet. I really like how it feels between my toes when I’m playing some Spikeball. You’re not afraid to dive and land on a rock. When you dive here, it’s like landing on the clouds.” —Alex Reiner of Westport, Connecticut 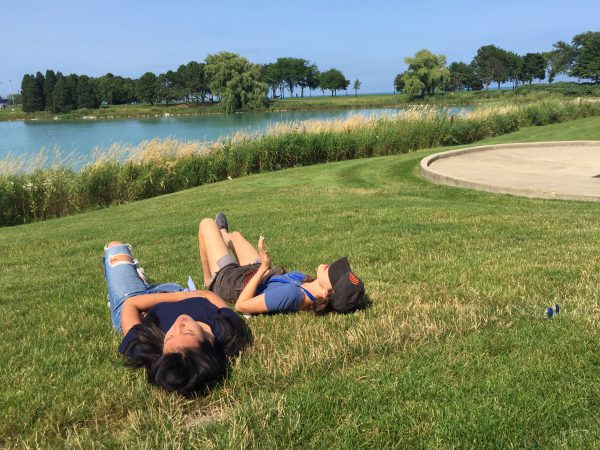 Kayla Guo and Jilly Rolnick lie on the grass by the lake. Photo by Joan Gwak 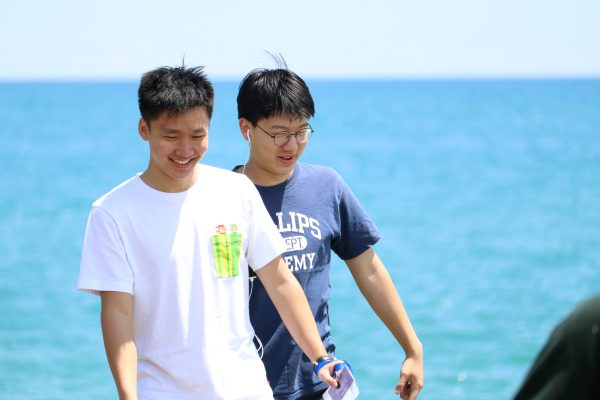 Tim Lan and JB Lim walk by the shore. Photo by Danny Vesurai 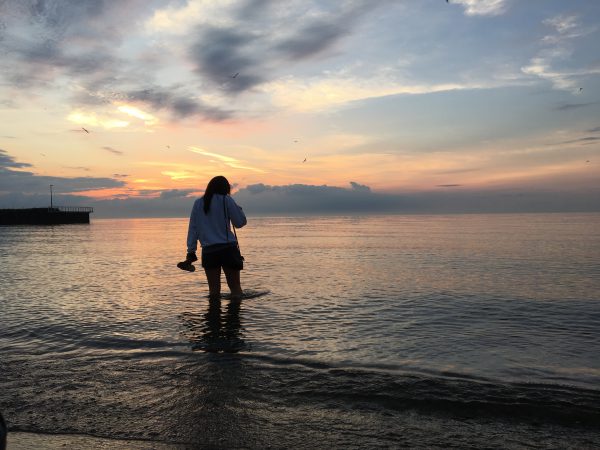 Kayla Guo wades in the lake as the sun rises. Photo by Livi Burdette 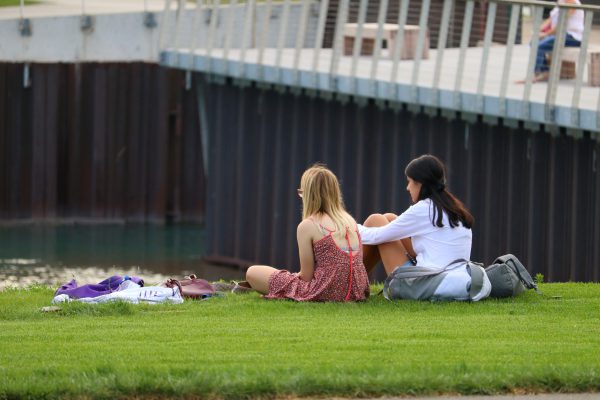 Juliana Mayer and Annie Zavitz sit on the Lakefill. Photo by Danny Vesurai 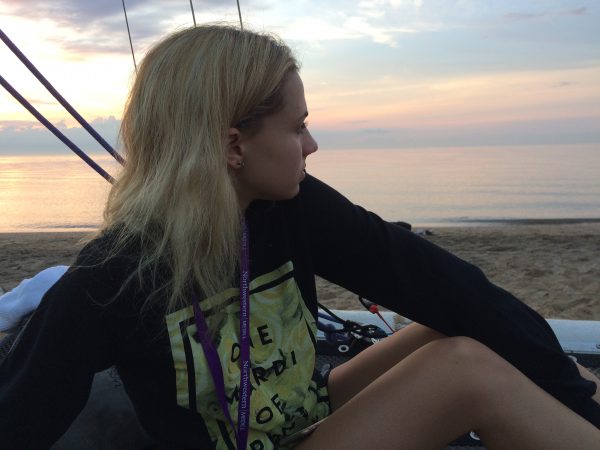 Frankie Gaynor sits on the shore early in the morning. Photo by Anne Pritikin