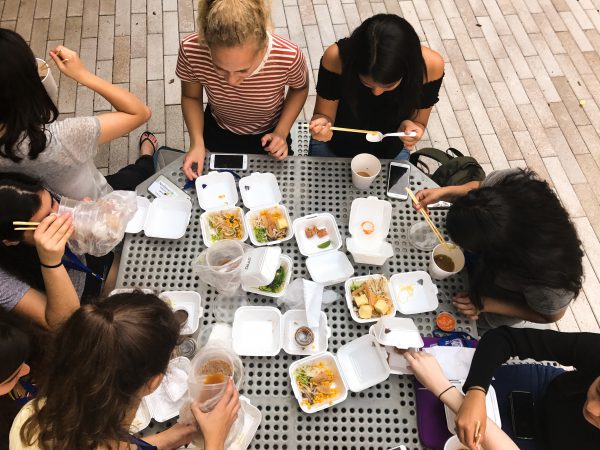 Cherubs dine in downtown Evanston on a Sunday morning. Photo by Sarah Fernandez

Downtown Evanston offers dozens of dining options, ranging from Chicago’s signature deep dish pizza to East Asian cuisines to Chipotle Mexican Grill. If cherubs chose to eat each meal outside of the dining hall for five weeks, they would end up spending a lot of money on food (and miss out on socializing over dinner). Here’s how the class of 2017 managed its money while exploring Evanston’s restaurant scene.

Many cherubs kept track of their weekly spending so they knew when — and when not — to eat out.

“Evanston is probably one of the more expensive college towns,” said Juliana Mayer of Burr Ridge, Illinois. “So I talked to my parents and structured a certain amount of money I could spend per week and stayed within that.”

Milly Chi of Buena Park, California, recorded both her cash and credit card spending on her iPhone notes app.

2. Overcome peer pressure or use it to your advantage

With so many restaurant options in Evanston, some cherubs feel peer pressure to eat off campus. Even a 9 p.m. run to Andy’s Frozen Custard for the most basic concrete runs $5.15. That adds up quickly.

Sam Zukin of Los Gatos, California, found the willpower to turn down his friends by checking his bank account every day.

“I am a very frugal person, so sometimes even when my friends were going out I say, ‘No, you guys are awesome, but, sorry, I don’t want to spend more money,’” he said.

Allison Ma of Shanghai, suggested cherubs help each other stick to their budgets.

“Make a deal with your friend,” she said. “If you spend over this amount of money, punish me in some way such as no buying candy or no ordering out. Because they are your friends, they support you and want to make sure you don’t spend too much money.”

Tim Lan of Zhongshan, China, originally planned to eat in town once per week. But after getting tired of the food at 1835 Hinman, he started ordering deliveries and exploring Evanston’s Chinese cuisines.

“There is a lot of repetition of pasta and pizza,” Lan said. “Future Asian students, bring ramen.”

Some cherubs went to downtown Evanston three times a week for lunch or dinner, spending an average of $60 a week.

Despite several cherubs criticizing the food at Hinman, Ma rated it as above average.

“Every morning I wake up and look forward to eating breakfast at Hinman,” she said. “Having scrambled eggs, sausage, tater tots, pancakes and chocolate milk gets me prepared for all the nerdy journalism fun we’re going to do throughout the day.”

And for saving money, there’s no better option than staying on campus.

“If everything in Evanston was free, I would obviously go downtown to eat,” Zukin said. “But I understand that spending is a really bad habit, and it can get you into a lot of debt. So manage your budget.”