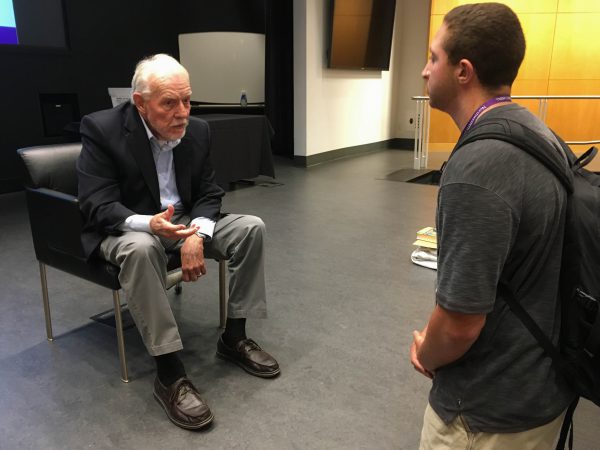 Coming into the Medill-Northwestern Journalism Institute, most students know that they want to pursue a journalism career. Some, however, are unsure of the specific path they want to take.

When Tania Karas spoke about covering the Syrian refugee crisis from Lebanon for two years, Sara Siquiera of Piedmont, California, realized international reporting could be a career for her. Siquiera has traveled abroad, but she had never before considered going to a place, leaving everything behind, living there and experiencing the unknown.

“It’s so cool to go to a country and share the stories of its people to a broader audience,” Siquiera said. “We saw how Tania was changed by the experience, and she saw how her stories impacted the refugees.”

Roxana Saberi equally influenced Siquiera. Saberi traveled to Iran and was in the process of writing a book when she was arrested and held in prison for about 100 days.

“The part of her being held in captivity was obviously really shocking, but the part of her going into a country that was unstable and reporting about the injustices that she saw was so amazing and brave,” Siquiera said.

Siquiera learned that Karas’ and Saberi’s heritages influenced their work and made her want to use her own identity to work in Pakistan.

“The main issue that I want to cover is education,” Siquiera said. “The kind of education you get depends on where you are in Pakistan, so in rural places, there isn’t good education.”

Christo Fosse of Park Ridge, Illinois, was also intrigued by Karas’ and Saberi’s lectures. But Richard Stolley’s lectures were the most influential for him. Stolley acquired the Zapruder film of the John F. Kennedy assassination for Life magazine. He also covered the Civil Rights movement in the 1950s and 1960s.

Fosse said his family has watched at least 20 documentaries about the Kennedy family. Before coming to the Medill-Northwestern Journalism Institute, Fosse knew that he wanted to be a breaking news reporter. Stolley’s lectures reinforced his goals.

Other guest speakers motivated students to pursue a specific field of journalism. John Schooner of Potomac, Virginia, always knew that he wanted to become a sports journalist. Lectures by Mike Wilbon and J.A. Adande strengthened that feeling, he said.

“These people are the ones that I’ve been looking up to and are the kind of sports journalist that I aspire to be,” Schooner said. “I see the person that they are and the personal brand that they’ve created, and I want to have that in the future.”