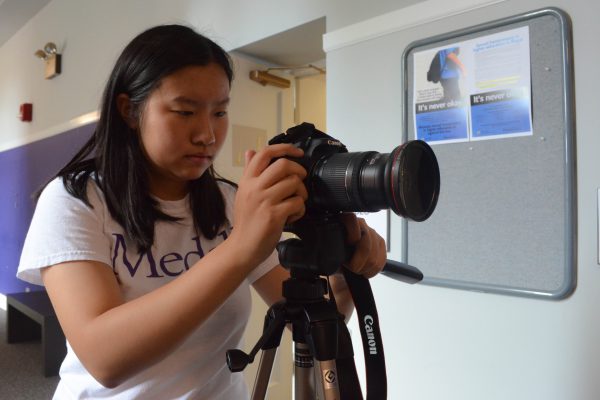 Scarlet Li, who attended a class in photojournalism ethics, can take her knowledge of ethically manipulating photos—such as adjusting color and light—back to her high school in Beijing. Photo by Rachel Barber

Merriam-Webster defines the term as “the discipline dealing with what is good and bad and with moral duty and obligation.”

For cherubs, the term holds other meanings. Ethics refers not only to the guidelines of being a credible and reliable journalist but also to a series of labs over the five-week academic program that teach students about decision making in their daily work.

Head instructor Joe Grimm led the labs, along with instructors Desiree Hanford, Tania Karas and guest instructor Bret Begun, who all emphasized the importance of ethics in journalism.

“We can only function in our roles as journalists in a functioning democratic society if we’re credible,” Grimm said. “Ethics force us to live up to the highest standards that the framers of the Constitution had in mind for giving this immense freedom of speech to us.”

During each lab, rather than listen to a lecture, each student received green, yellow and red cards. After being given a real-life ethical dilemma, students had to make a decision, using their cards to vote.

“[The cards] force people to make a decision in a group setting, and everyone gets to see which way you’re leaning,” Grimm said. “If you’re holding a green card and everyone else is holding a red card, you think twice about whether you’re holding the right card. And if you feel strongly about it, then you can make the argument that could possibly turn those other cards your way.”

Liat Weinstein from Brooklyn, New York, said that the labs were difficult because each ethical dilemma could be interpreted differently. She found her decisions often differed from those made by actual publications and other cherubs.

The cards illustrated the different interpretations of each situation, said Juliana Mayer from Burr Ridge, Illinois.

“A lot of us would be holding up both red and green cards so it wasn’t as clear as I thought it would be,” she said.

The cards helped Ilena Peng from Cupertino, California, learn about other cherubs’ points of view.

“It’s interesting to see how a group of people who all had similar experiences in high school journalism could have such different answers regarding these scenarios,” she said.

For Danny Vesurai of Mountain View, California, the lecture about libel law by Director Roger Boye had practical applications for his high school publication. After learning more about libel law, he said he wanted to go back and tell his staff to learn and understand their student press laws.

Hanford agreed that cherubs could help their high school publications with their newfound knowledge of ethics. She encouraged them to take the Society of Professional Journalists Code of Ethics back to their publications so they can discuss ethics before a problem occurs.

“When someone lies, when someone plagiarizes or misrepresents a source, it does damage to the reporter, to the sources, to the media outlet, to the publication,” she said. “It’s not just hurting one person or entity. It’s a domino effect.”