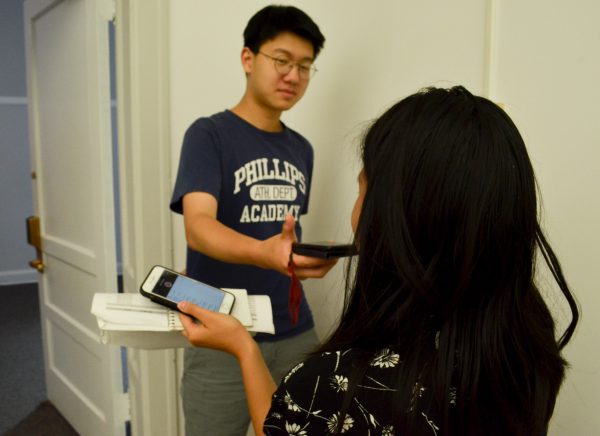 Caroline Nash of Washington D.C. did not know where to turn when 40 people and three days into her trend story, she had no interviews.

At the Medill-Northwestern Journalism Institute, reporting is taught as the most fundamental part of journalism. But students must learn to handle a lot of rejection, too.

Through emails, phone calls and face-to-face interactions, cherubs were exposed to the realities of life as journalists, such as reaching out to strangers while facing deadlines.

“At first, I wasn’t sure what to do because I felt like I exhausted all of my resources” said Nash.

Nash met with her instructor, Mary Lou Song, and together they devised a plan to find sources. Nash’s story was about videos made to relax viewers with distinct and repetitive sounds. At the end of the week, Nash interviewed her best sources, such as video producers and professors. Nash said she wants future cherubs to know that rejections aren’t personal.

Deeksha Udupa of Edison, New Jersey, called offices, assistants and any potentially helpful phone number to find someone for her trend story. Only four of the 12 people she contacted accepted.

“I’m pretty sure I cried at least twice,” Udupa said. “It was like an emotional breakdown.”

Like Nash, Udupa was successful in getting interviews by the time the story was due, but she had been unfamiliar with rejection. At her high school newspaper, it’s rare for students and teachers to ignore or reject her, she said.

Udupa and Nash were most frustrated with their trend stories, which required cherubs to contact specific people. Two assignments that built up to the trend story relied on interviewing people on the street.

“It’s abnormal for someone to just come up and ask for an interview,” JB Lim of Andover, Massachusetts, said.

For a Fourth of July parade story, Lauren Katz of Iowa City, Iowa, began to approach a mother and daughter. Before she even spoke, the daughter stood up and said that she and her mother don’t do interviews, Katz said. Though Katz was surprised, she kept in mind that there will always be someone else to interview.

“Persistence is important, but sometimes it’s good to look elsewhere, too,” she said.

Lim said that his first rejection at cherubs was when he tried to stop a man on a jog. Now, he has a strategy for finding random sources.

“Look for people who are single and seem like they have nothing better to do,” Lim said.

Udupa prefers person-on-the-street interviews to phone or email because people can’t ignore someone when they are looking eye to eye, she said. Contacting sources through email meant she had to wait for a response.

It doesn’t matter that cherubs are still “amateur” journalists, some people don’t want to be interviewed, even by “professionals,” Udupa said.

Lim was intimidated while reporting for his early assignments, but the experience made him more comfortable for the big assignment. Though sometimes strangers he approached appeared to be unsettled meeting such a young reporter, Lim knew that he was a student with a real purpose.

“Rejections are a part of the process,” Lim said. “Just embrace rejections, but also know that journalism still exists because people are willing to let their voices out to the press.”