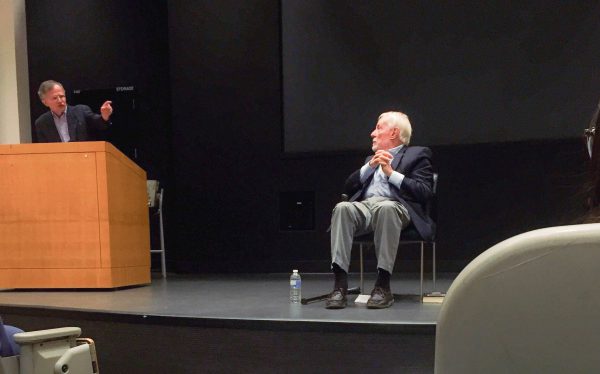 While covering the assassination of President John F. Kennedy in November 1963, Richard Stolley said he learned “when to be a gentleman and when not to be.”

Stolley, the founding editor of People magazine, covered the historic event as a reporter for Life magazine.

“I grabbed two photographers and boarded a plane to Texas,” the 88-year-old former cherub instructor said. It was so packed that reporters were sitting in the aisles, and “the pilot, who was listening to the news through his headset, kept the passengers updated,” he said.

Stolley told cherubs how he obtained the only home-movie film of the president’s murder. Just hours after the president was shot while riding in a Dallas motorcade, Stolley was in his hotel in Dallas and got a phone call from Life freelancer Patsy Swank. She told him a man named Abraham Zapruder had filmed the assassination with an eight-millimeter camera.

Stolley said he ran his finger down the Z’s in the phonebook and found Zapruder’s phone number. Stolley called him, and they agreed to meet at 9 the next morning. Though it was tempting to rush to Zapruder’s house right then, Stolley said he gave Zapruder the time he needed “to mourn the president he so revered.”

Stolley knocked on Zapruder’s door at 8 a.m., wearing a suit and tie. Zapruder opened the door. “’All right,’ he said. ‘Come in,’” Stolley recalled.

As the hours passed,  Zapruder’s house filled with journalists. Stolley introduced himself to some of them, but mostly kept his distance because he wanted to be respectful.

Stolley described the competition among reporters from various publications. All sought the film, but Zapruder only invited Stolley into his home office. Mayhem broke out.

“Don’t sign anything,” journalists shouted at Zapruder through the office door. They pounded on the door as Stolley negotiated with Zapruder. Some walked down the block to the nearest payphone — there were no cellphones back then — to call Zapruder’s house.

Eventually, Zapruder and Stolley settled on a price and signed contracts.

“The biggest thing I learned that day was when to be a gentleman,” Stolley said. “I was a gentleman, and in the end Zapruder trusted me with his film.”

Kavya Srikanth of Bellevue, Washington, said it was incredible hearing from someone so pivotal in the coverage of Kennedy’s assassination.

“As we get further away from the 1960s, it’s harder to find people who were alive during that time and have a story to tell,” she said.

Carmen Molina Acosta of Bethesda, Maryland, said she enjoyed listening to the man who got the film that he wanted in a very humane and respectful way.

“One thing I dislike about the media industry is how inconsiderate some reporters are when getting certain stories,” she said. “Getting there first is part of the job, but it’s also part of the job to be sensitive to what people are feeling.”

Stolley said the assassination of a president splintered the nation in ways he has not seen since 1963.

Nina Price from Berkeley, California, said Stolley’s talk transported her back to the 1960s and helped her understand what it was like for the nation to experience such a tragedy.

“He conveyed to us the intensity and difficulty of reporting on JFK’s assassination,” she said. “It reminded me of the importance of our job as journalists.”