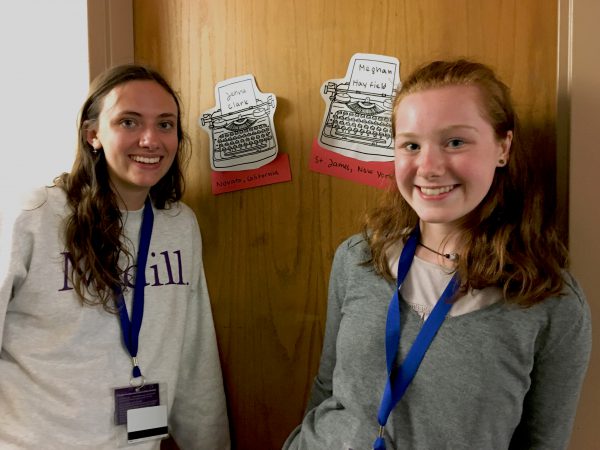 Meghan Hayfield and Jenna Clark share a room on the first floor of East Fairchild. Photo by Olivia Cohen.

Like entering the lottery, it’s a matter of chance. For some cherubs, winning means getting a roommate, while for others, it means living alone.

“The first day, I was really upset,” said Zack Cherkas of San Mateo, California. “I thought my mom filled out a form requesting that I have a single because she wanted me to get more sleep.”

After Cherkas learned that mother-meddling played no role in his room assignment, he reveled in the luxury of having his own space.

“I don’t have to worry about waking my roommate when I call my friends late at night, which is nice because my friends are on California time,” Cherkas said.

The neatnik, who keeps his bed made Pottery Barn-style, added that living on his own helped him to keep the “ambiance and appearance of my room in peak shape.”

Yet other cherubs have found that sharing a space with someone gave them a built-in friend.

“If I was back home, James Barringer and I would hang out with different people, so I probably wouldn’t know him at all,” said Aaron Park of Los Angeles. “Being his roommate has helped me get to know him, and I’m very glad for that.”

Park, a self-proclaimed eccentric, and Barringer, his laid-back roommate, now talk everyday and even play an ongoing chess game over the Game Pigeon app.

Jenna Clark of Novato, California, said living with someone has become second nature.

“It was weird the first night thinking I’m sleeping in a room with this girl I don’t know at all,” Clark said. “But as we got to know each other, I became so used to it that it will be weird not to share a room with someone when I get home.”