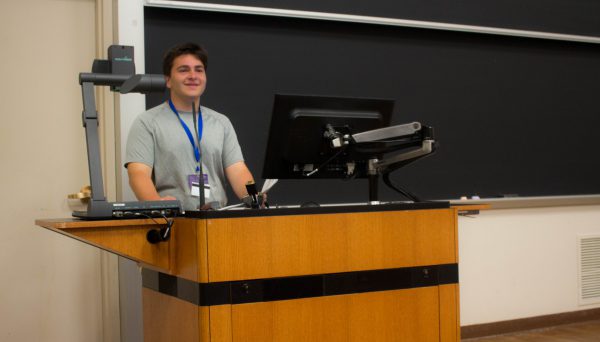 Eli Karp reads the essay that he wrote in the fourth Write Off session. Photo by Benjamin Davis

At Medill cherubs, weekdays are for lectures, workshops, field trips and assignments. But Sundays are for clubbing — that is, club meetings for cherubs who want extra opportunities to hone their video, audio, coding and writing skills.

Cherubs could choose from Show off, Sound Off, Code Off or Write Off. Though optional, clubs were always well-attended.

For Show Off, cherubs worked on videos throughout the week by asking fellow cherubs one question each on camera. Their footage was then edited into five-minute videos shown to all cherubs on Sunday evenings.

“Every year, on the first day of staff training, I ask the CAs what the most popular song of the summer is, and we’ll come up with a couple of ideas,” said instructor Sarahmaria Gomez, who leads the Show Off club. “Then I listen to the songs, and I try to visualize which song would be best for inserting terms about journalism.”

Sound Off was also broadcast-based, but cherubs made podcasts instead of short videos. These podcasts were what audio journalists call vox pop— from vox populi, the Latin phrase for ‘voice of the people’— meaning short interviews with members of the public, often preceded by a single question from a journalist.

Eunice Alpasan from Chicago made vox pops of cherubs describing some of their ‘firsts’ at the program.

“It’s really different than recording off your phone and writing because you need to get over some verbal ticks you have,” Alpasan said.

Cherubs who didn’t favor video or audio could attend Write Off instead. But instead of writing news, cherubs wrote personal essays. Each week, instructors Mary Lou Song and Karen Springen assigned a different writing prompt. Cherubs wrote about a time when they coped after life gave them lemons; the family history and meaning behind their names; and the story of their first crushes.

“All week long, you’re reporting and writing more in a standard journalism format, so it’s really fun to have this creative outlet,” Springen said. “I’m hoping some people try to publish them, and I’m hoping some of you might use one or an edited version of one in your college essay.”

Not only did the clubs give cherubs additional material to publish or add to their portfolios, they also gave them skills to build a portfolio website and much more.

Code Off was broken into two sections: a lesson from instructor Alex Duner and a coding project.

“The first week we did animal designs, and even though we didn’t work on those afterward, it definitely helped us get used to the basics,” said Brian Chang from Chino Hills, California. “The third week, we added stuff to the projects we made during the second week using JavaScript.”

See the Pen Bear by Brian Chang (@brainchong) on CodePen.

Between Show Off, Sound Off, Write Off and Code Off, cherubs could explore many different types of journalism.