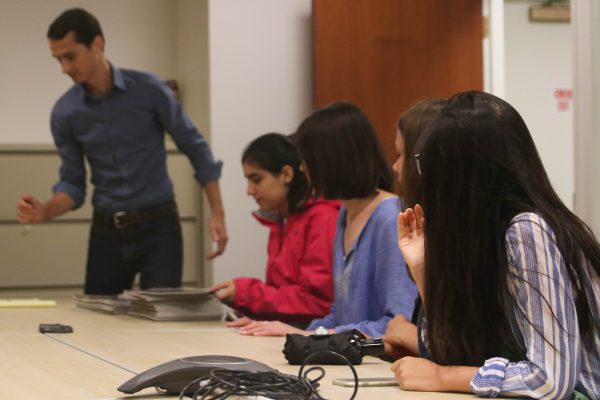 Cherubs listening to a guest speaker at Chicago magazine. Photo by Danny Vesurai

At field trips to various Chicago news outlets, students had the opportunity to visit newsrooms and meet journalists they admire.

Students visited ABC 7 News, WBEZ 91.5, the Chicago Sun-Times and Chicago magazine. They explored careers in journalism that were perhaps different from what they’d envisioned themselves pursuing.

At ABC 7, students watched a live news broadcast from inside the control room and studio. Heavy rains and flooding that morning meant a busy news day. The trip was organized in memory of Anne Swaney, a former ABC 7 Chicago executive digital producer and Medill alumna who was killed in Belize in 2016.

Kaitlyn Tom of Hillsborough, California, said broadcast was an intersection of her two passions: journalism and theater.

“After visiting, I felt inspired and thought, ‘Maybe this is something I can do,’” Tom said. “The next day I was in Norris looking at the TV, and it was on ABC 7, and it was the same people we saw. It was cool to see them in person doing their thing and then seeing them on TV.”

At the Chicago Sun-Times, students met Frank Main, who won the Pulitzer Prize for Local Reporting in 2011 for his coverage of crime in Chicago neighborhoods and the culture of silence that allows it to continue. Main discussed the ethics of covering a suicide that he witnessed and his reporting for the series, “Life on a Ledge.”

Jenna Clark of Novato, California, said the visit taught her that asking questions is crucial to writing interesting stories. Clark said she is most interested in working at a publication even as newspapers face declining print readership.

(The Sun-Times was bought for $1 on July 12 by an investor group, allowing it to remain open and independent from its competitor, the Chicago Tribune.)

Earlier in the summer, students met two cherub alums who also graduated from Medill and now work for the Chicago Tribune. Elyssa Cherney is a crime reporter for the Tribune who previously worked for the Orlando Sentinel and covered the Pulse Nightclub shooting. Howard Reich, an award-winning columnist, spoke about his series on Norman Malone, the one-handed pianist who debuted at 78 years old.

“Being able to talk to the editor, Susanna Homan, hearing about her experience and how she got to the position as editor of the magazine today was really, really cool,” said Cassidy Wang of Southborough, Massachusetts. “Hearing about her day as editor, you get to see the various jobs she has to take on.”

Haley Fuller of New Canaan, Connecticut, said the visit to WBEZ piqued her interest in radio.

“I like it because it’s very conversational,” Fuller said. “It just sounds like you’re listening to one of your friends tell you something you didn’t know before. I really like the idea of going into audio journalism because there’s a lot of working in teams to produce something.”

Fuller said the experienced journalists encouraged students to be persistent and to learn from their mistakes.

“They said you just have to try and be willing to mess up and talk to a bunch of people,” Fuller said. “You have to get into it.”