Although cherubs must be on their floors by 11 p.m. every weekday or by midnight on weekends, they do not go to bed then. Surprised? Not so much.

“Staying up late is a really big part of the cherub experience,” said Ananya Panchal of Los Altos, California. “No one wants to miss out, and you just want to be out there, even if it means losing sleep.”

Panchal lived on floor one of the dorm and took part in the floor’s effort to make a video of Kesha’s TiK ToK.

“We did a couple of takes of the beginning, and the first time we ran the whole thing through, it worked really well,” Panchal said.

Despite cherubs’ days being jam-packed with classes and other programming, people still find the energy to let loose at night.

“Things are usually happening on floor three until about 2 a.m.,” she said. “There are a lot of sing-alongs and dance parties.”

The third floor girls lip-sync to “Party in the USA” by Miley Cyrus.

Max Hayes of Lake Forest, Illinois, used the word “rowdy” to describe the after-hours life on the boys second floor.

For example, the guys held weekly sing-alongs every Friday night when confined to their floor and occasionally received noise complaints from the three community associates — 2015 cherubs-turned-Medill students who live in the dorm during the five weeks.

“It’s just a time where everyone on the floor can have fun together,” said Sam Heller of New York, the DJ for these jam sessions. “‘Don’t Stop Believin’ and ‘Starships’ were always crowd favorites.”

Floor two also moved the furniture out of a common room one night to play Spikeball. 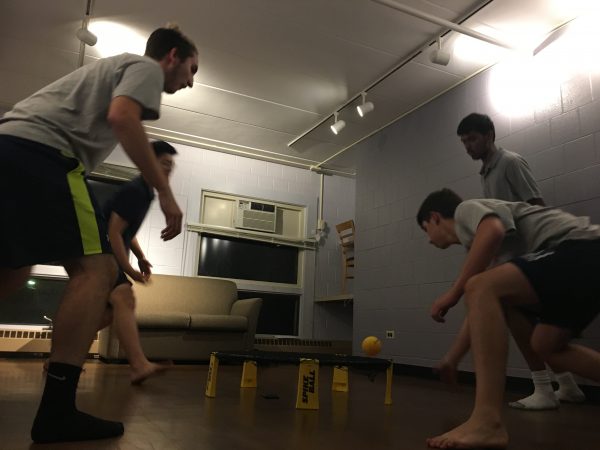 Sacrificing sleep to be with other cherubs promotes floor bonding. Christo Fosse of Park Ridge, Illinois, said late-night activities are paramount to the overall experience.

“That’s where the real memories and the real friendships are made,” Fosse said. “Nobody makes friends by sitting alone in their room.”