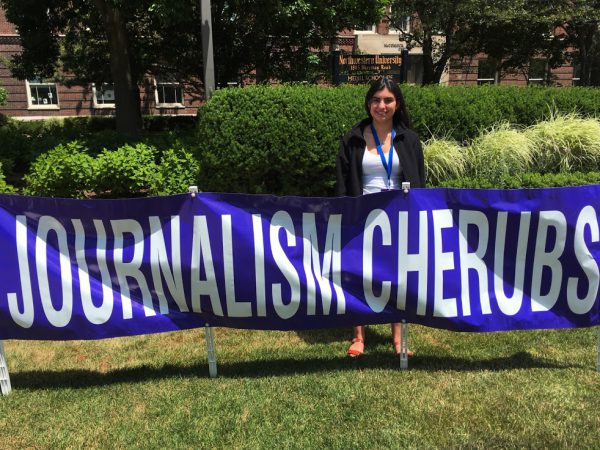 Anne Pritikin of Mill Valley, California, started her cherub journey lost on Northwestern’s 231-acre campus. After walking with her mom for what seemed like forever, dragging two suitcases behind her, she found a chalk-covered sidewalk leading to the East Fairchild dorm.

Despite her circuitous route, Pritikin was still the first student to arrive on Sunday. She arrived at 10 a.m., an hour before the official move-in began.

Fortunately, the head instructors and three community associates (former cherubs, called CAs, who are rising sophomores at Medill) were prepared for student-journalists accustomed to beating deadlines.

“I heard voices in the lounge and walked in, and all the CAs started cheering and smiling,” she said. “It was a really nice, warm welcoming.”

After collecting a welcome packet and her name-tag, room key and meal card, Pritikin settled in her room and waited for fellow cherubs.

Just an hour later, Rachel Schonberger of Weston, Florida, pulled into the cherub driveway. She said she arrives early to everything, and summer programs would be no exception.

“I wanted to make sure I could pick the bed I wanted and get my stuff ready before meeting people,” she said. “I was really worried about making friends, but everyone was super inviting and just as nervous as me.”

Schonberger set up her room and then walked down the hall to find people. “Twenty minutes later, six girls were walking to Whole Foods, and they have been my friends ever since,” she said.

Around that same time, Matt Chilson of Mocksville, North Carolina, checked in, too.

“Everybody was trying to meet people, so it was easy to just walk up and be like, ‘Hey, I’m Matt from wherever,’” he said. “You guys would just become friends like that, and it wasn’t hard.”

The bonding began with Chilson’s first trip to Chipotle.

“All of a sudden, there were 10 cherubs descending on Chipotle, and by the end of the day, we had a list of the things we wanted to do within our five weeks,” said Joe Weinberg of Dallas. “It was reassuring, and I was pleasantly surprised by how quickly we bonded. I was just throwing myself into the fire.”

Unlike Chilson, Thomas Martinez of Miami said he was anxious about not liking his roommate. Once he moved in and met Sam Heller of New York, he knew everything would be OK.

“This is a very collaborative camp and not too cut-throat,” Martinez said. “Even though it’s really competitive people from around the country, it feels like a family.”

Zack Cherkas of San Mateo, California, said he thought the first day would be awkward, but 30 minutes after arriving, he was at the Lakefill playing football with boys he had just met. In five weeks they would be his best friends.

“They told me it would be the best summer of my life,” Cherkas said. “It was.”