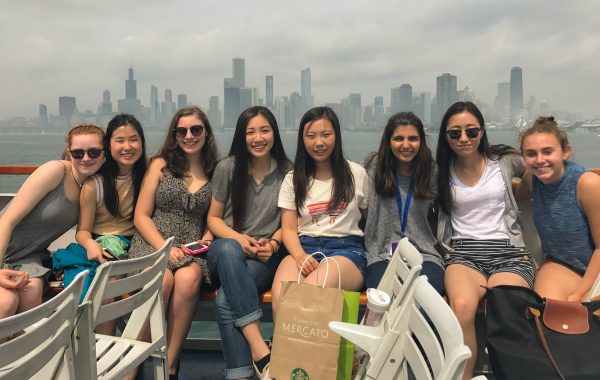 Cherubs pose for a photo on Lake Michigan with the Chicago skyline in the background. Staff Photo

Cherubs experienced Chicago during week one with a 90-minute boat tour on the Chicago River and Lake Michigan, where they saw landmarks such as the Willis Tower and Trump Tower, the former site of the Chicago Sun-Times.

“I had never visited Chicago before,” said Marilyn Zhang of Shanghai. “But I follow several Chicago photographers on Instagram, and it was so cool to see it in person. I love seeing all of the bridges and buildings.”

“I’m from Boston,” Jones said. “So we don’t have rivers that run through the city like that. It was something that I had never done before, and I was excited to get a sense of how the city was laid out.”

Jones said she liked all of the glass buildings, such as the curved one at 333 Wacker Drive, along the Chicago River. Architect William Pedersen designed the facade to reflect the river and other skyscrapers.

The tour started in front of the Wrigley Building, which sits along the Magnificent Mile, went down the river to Willis Tower and then traveled up the river to Lake Michigan.

Brian Chang said he enjoyed seeing the skyline from the lake.

“When the boat was leaving the city, looking back at it, the city was shrouded in fog,” said Chang from Chino Hills, California. “It was a tad blurry, but it provided a nice, aesthetic view. Seeing the old lighthouse was really cool.” 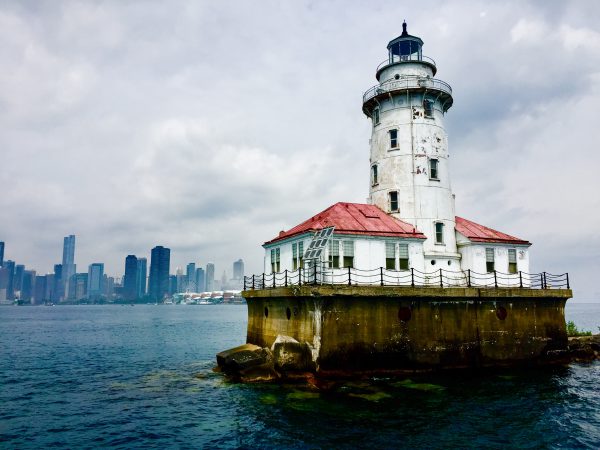 However, not all cherubs were looking forward to the tour. Andrea Klick of Macungie, Pennsylvania, said she thought the trip was going to be boring. Afterward, Klick said she had a better time than expected.

“There was a group of people from South Korea that were really into the entire experience,” Klick said. “They wanted to take pictures with American kids and were really nice to us.”

Chang said even if someone isn’t an “architecture nerd,” they would still have a good time on the tour.

Zhang said the trip serves as an opportunity to make memories.

“I brought my Polaroid, and I took a ton of pictures of the city and with my friends,” Zhang said. “It felt good to be with everyone, enjoying the view together.”