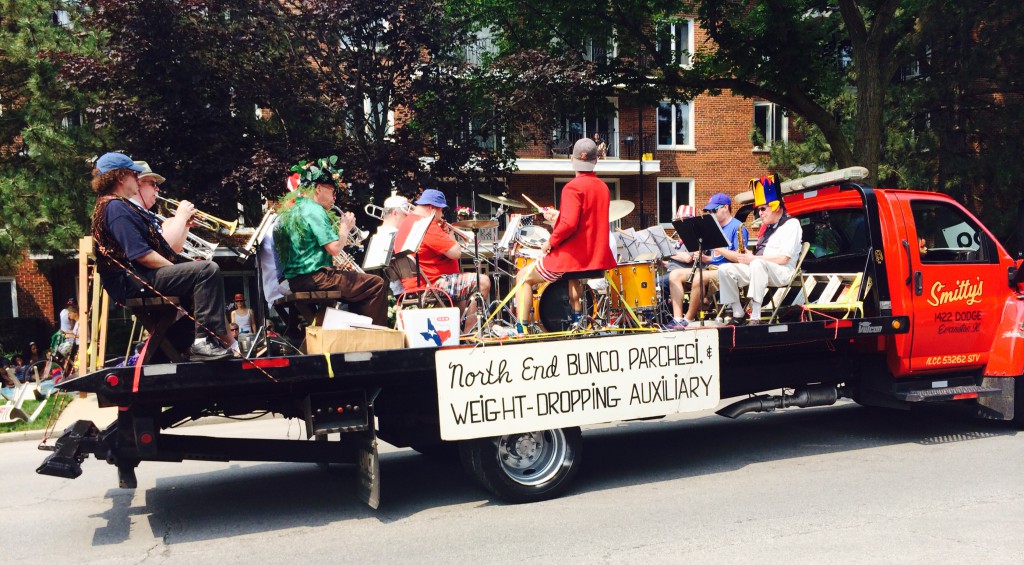 The longest running float in the parade ambles down Central Street. Photo by Emily Chaiet.

I arrived wide-eyed at the Evanston Fourth of July parade with hopes of writing the perfect story. I heard that one story would be picked to be published on The Daily Northwestern website, and I wanted more than anything for that story to be mine.

I’ve always been a go-getter, and I was determined to write a story about the oldest float in the parade, the North End Bunco, Parchesi, and Weight-Dropping Auxiliary. The float, which featured a group of men in outrageous costumes playing instruments, would be performing in the parade for the 75th time.

I arrived at the parade and was immediately caught in a sea of people wearing red, white and blue. I walked through the crowd to the parade staging area. There were more than a hundred floats, but I only wanted to find one. The North End Bunco, Parchesi, and Weight-Dropping Auxiliary was supposed to be the 29th float in the parade, but when I arrived at its designated spot, it was empty.

I figured it must be parked somewhere else, so I continued walking down the street. There were other interesting floats filled with dancers and singers, but I bypassed them because I only wanted to interview the members of the one group. As I reached the end of the street, my heart raced. The float was still nowhere to be found. My plan for the perfect story was going awry.

Still determined to find the float, I began to ask those working at the parade if they could direct me to where the float was. All directions led me to the same empty spot in the staging area.

I stood in the middle of the street, still with no interviews. As I passed my fellow cherubs, they raved about how they had already conducted five interviews or found the perfect source for their story.

I began to stress out. The parade was about to start in 20 minutes, and I still had no interviews or any clue about my story subject. I regretted wasting all my time looking for one float, while I should have interviewed another float as a backup plan.

As the floats began to move, I decided it was time to give up. Just as I turned around to walk back to watch the parade, though, I saw a float filled with musicians dressed in ridiculous costumes. To my delight, it was the North End Bunco, Parchesi, and Weight-Dropping Auxiliary.

I ran to the float and interviewed four of the performers. I had to interview them as the float was moving, so my interview was completely rushed.

Looking back, my story would have been so much better if I had gone into the parade with an open mind. Although I found the group I wanted to interview, I wasted so much time looking for them instead of interviewing some the thousands of interesting people participating in or watching the parade.