I knew it would be a long five weeks when I was handed a microwaveable package of Salisbury steak.

It was the first night of the Medill cherubs program and I had been looking forward to see what type of kosher meals I would be eating for the next month since my plane landed at O’Hare. I was immensely disappointed to learn that the frozen food I was given was the worst food I had ever eaten. Despite the time it spent in the microwave, the meat was cold. The carrots tasted bitter and the mashed potatoes looked at least a few years old. 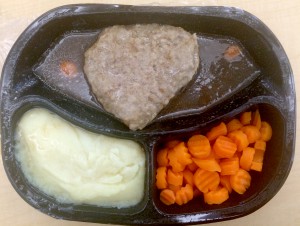 As an Orthodox Jew, I keep a kosher diet. I am therefore forbidden from eating almost all the food at Hinman.

Every day I am given frozen meals that were ordered in from outside Northwestern. I also have a nut allergy and so I had to ensure that I not only had kosher food to eat, but also that my food did not come into any contact with tree nuts. Although I still dislike the kosher food given to me, I have come to realize that I should be grateful that Northwestern University accommodated my needs.

At first it was a hassle to keep kosher during cherubs. Other cherubs often ate at restaurants that I could not eat in, and local grocery stores’ kosher food tasted worse than my microwavable packages. However my friends understood my needs and were sympathetic to my challenges. They accompanied me to 1835 Hinman despite their ability to eat downtown and were eager to share any kosher snacks they had with me.

Additionally, I found support from my friends, as well as the instructors, during the Sabbath. Since I am observant, I cannot write or use technology from Friday night to Saturday night each week. My friends often opted not to watch movies until after I went to sleep on Fridays so that I would be able to hang out in the lounge with them. Additionally, my instructor, John Kupetz, had the utmost respect for my needs. Because I do not write on Saturdays, he exempted me from completing the Fourth of July feature story assignment and gave me an extension for the trend story.

Being an Orthodox Jew could be restricting as a cherub, but I found that everyone at the program is supportive of others’ traditions. I learned to show respect to people with customs different from mine, for that is how everyone else treated me. If I had the chance to do it over — the terrible food, the lack of activity on Saturdays — I would.