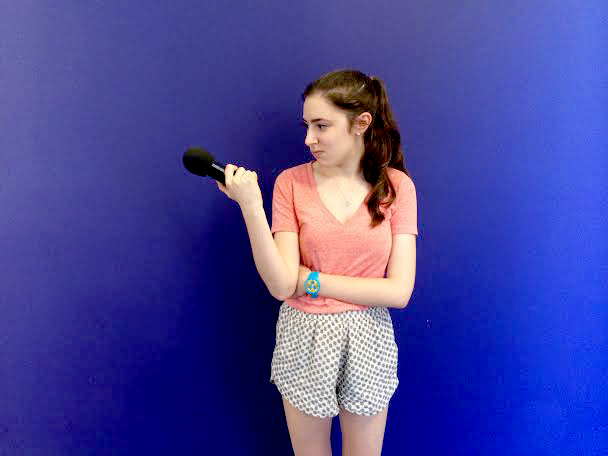 I have a confession to make: before I came to cherubs, I’d never listened to a podcast  or a radio show.

I thought Serial was what I ate for breakfast, and the word StoryCorps did not ring a bell. I believed that NPR exclusively marketed to the over-50 demographic, so I naturally felt that I would not be a member of that audience for a long, long time.

And then I attended the workshop “Telling Your Story Through Audio” taught by instructor Sarahmaria Gomez and guest instructor Lindsey Kratochwill.

I took a seat in the classroom, a little wary, but excited to try something new. First, the instructors played a few StoryCorps pieces of people relaying their memories in a conversational interview style. I thought that without any photos or videos to look at with the audio, I’d be bored after a minute or two, but the opposite happened: I was riveted. I didn’t realize how compelling it is to hear people relay their unique stories in their own voices, without any visual elements to detract from the simplicity. Afterward, Sarahmaria and Lindsey gave us a few prompts and told us to come up with a story we could tell in a StoryCorps-like podcast. We would all record ours and play them for the class.

After about half an hour, the class reconvened. There were 16 kids at the table. I heard 16 stories. Each was a sliver of the storyteller’s life, something I didn’t know before I walked in the door of the workshop. I learned that one of the cherubs is really good at math and that he felt some of his greatest pride when solving a math problem nobody else could solve. I learned that one cherub came here from Korea when she was young. I learned about the great catch one cherub had while on a deep-sea fishing boat with a host of rugged fishermen.

For 45 minutes, the room filled with voices and stories, happy moments and sad moments, proud moments and scary moments. It felt like a conversation. It was natural. It was human.

People are storytellers, and audio journalism celebrates that. It traps the personality that can only come from a voice — the way it goes up, goes down, gets soft, gets loud, laughs and cracks. Since there are no other elements, these movements in the voice are noticeable and beautiful. It’s a conversation with an invisible person when they tell a story nobody would know otherwise. It’s awesome.

When I get home, I’m going to download some podcasts. I’ll listen to Serial when I eat my cereal and to NPR when I drive, because I now know that people who listen to the radio don’t have to be three times my age. After all, every human loves a good story.