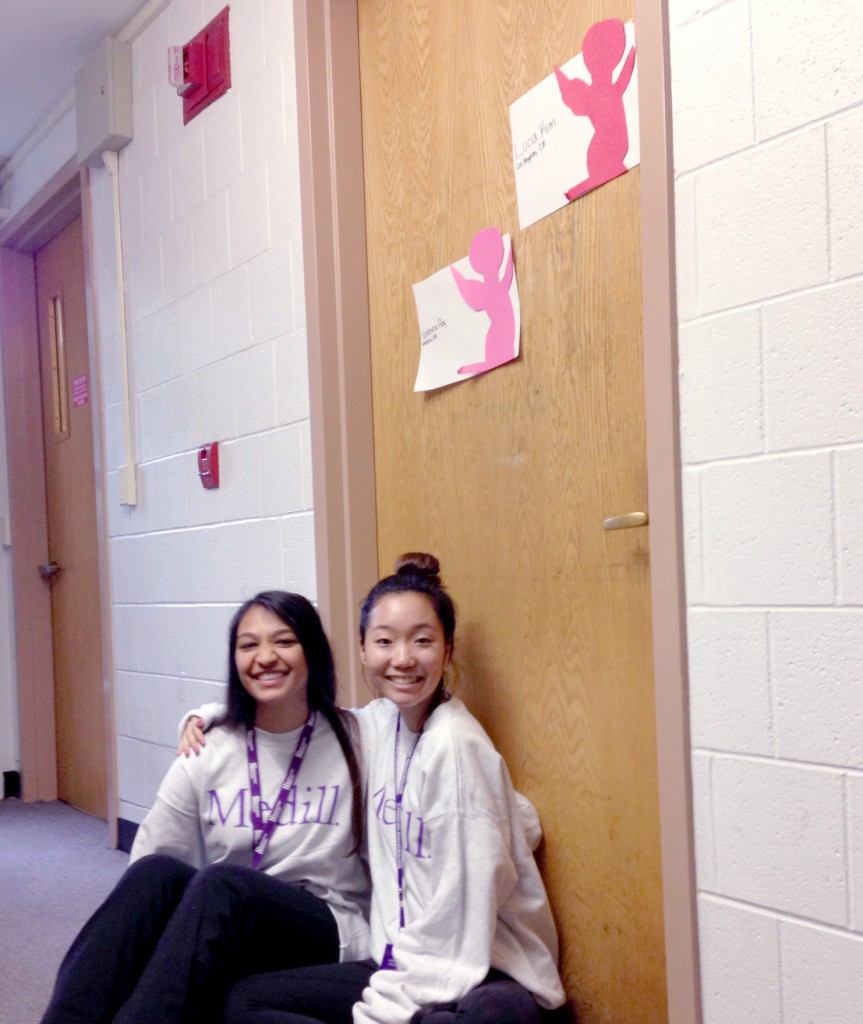 Natasha Roy and Lucia Kim in their Medill sweatshirts in front of their room. Photo by Angela Chon.

The first time I talked to Natasha, I think I probably had a really creepy smile the whole time. I was trying to be extra friendly. She didn’t seem like she wanted to talk to me much, and I felt as if I was having a one-sided conversation. I continued to ask her questions about her hometown, her favorite bands and, of course, boys.

“Does she like me? What if she thinks I’m weird?” I thought.

After orientation, I helped Lucia carry her suitcases to our room. The elevator door was so slow that we couldn’t help laughing. We’ve shared a lot of laughs since then.

I was kind of nervous since I’m from a small rural town in Georgia, and I thought it was extremely different coming from Los Angeles. Even though I was sure we would quickly run out of things to talk about, we somehow ended up spending hours discussing our friends back home, guys and our favorite shops and restaurants.

“No judgments,” we said.

It was kind of surreal to already feel comfortable enough with Lucia to tell her stories that only some of my good friends know. I went to bed thinking that there was a chance we could actually become close friends.

LEARNING TO DEAL WITH EACH OTHER

Because Natasha went running every morning, she set an earlier alarm than mine. Not just one alarm, but multiple, sometimes even up to five. Quite frankly, this was not pleasant. I would wake up to an obnoxious beeping sound that would stop and then continue a few minutes later. I woke up two times (once from Natasha’s alarms and the second time from mine) for about a week. Natasha was considerate and turned down the volume of her alarms, but I still woke up. After the first week though, I could sleep through the alarms.

As embarrassing as it is, I have an undying love for horrible Australian TV shows, especially Dance Academy. Unfortunately, all of my friends at home refuse to watch Dance Academy with me. On the first week, I was on Netflix, and when Lucia asked me what I was watching, I hesitated before admitting “Dance Academy.” To my surprise, her eyes widened and she said that she loved the show. It was one of the first things that we were able to bond over.

I’m so glad to have given our friendship another chance even after the first few awkward conversations because now, we’re basically attached at the hip. Wherever Natasha is, 99 percent of the time, I’ll be there as well. I know I’ve found a life-long friend, but also a life-long pingpong partner. After lectures, we like to go the game room and intimidate everyone with our amazing (not) ping-pong skills. We like to call ourselves the “Roommate Pingpong Champions.”

I am usually most comfortable if I’m doing something with Lucia. I feel like it’s totally OK for me to vent to her or come to her with a problem. It’s corny, but we got matching friendship bracelets from the Evanston Cultural Festival. One time someone told us, “Y’all are so cute. You’re like best friends and roommates. I wish I had that.” I’m definitely grateful that I can turn to my roommate for anything. Some of my favorite moments have been with Lucia, like the time she finally went for a run with me at 7 a.m. and we saw the sun shining over the lake, and none of those moments would have been the same without her. We’re also planning to get a journal that we’ll mail to each other back and forth after camp ends, so we’ll always be in touch at some point.