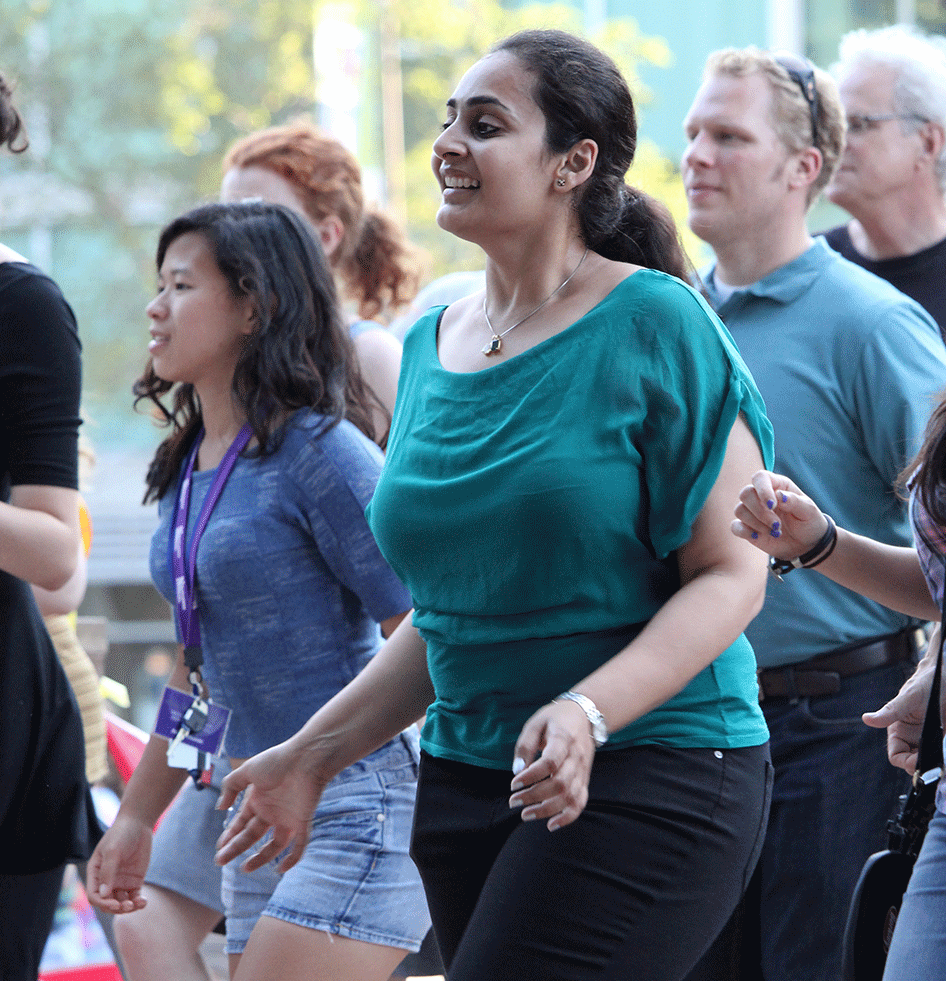 It’s Thursday, Let’s Dance! offers dance lessons for people of all ages every Thursday night during summer beginning at 6 p.m. in downtown Evanston. After a professional dance instructor teaches different dance styles, a live band plays and attendees can show off their newfound skills.

Robbie Short attended the dance party with two friends to cover a story for cherubs. While his friends went to dance, Short photographed the people on the dance floor.

“People would just come off the street and start dancing,” Short said. “The interactive community nature of it highlighted Evanston’s small-town feel.”

Some cherubs spent their Saturday mornings at the Downtown Evanston Farmers’ Market, wandering booths of fresh fruits and vegetables.

Maya Eliahou headed to the farmers’ market on the last Saturday of Medill cherubs after wanting to go for weeks.

“They had fruit in large abundance and a lot of vegetables and a lot of really neat pastries, pies and fresh breads,” she said.

During the third weekend of the program, the Ethnic Arts Festival had food, live music, vendors and crafts. Cherubs walked to the festival during their free time to enjoy authentic foods and ethnic music.

Eliahou visited the festival and bought a ring from a jewelry vendor and a mango-on-a-stick from a Mexican food stand.

“I really was into the variety of shops,” Eliahou said. “There were all these booths and they were all selling different unique things.”

Jennifer Schonberger and Gillian Weatherford went to the festival for dinner after a weekend of working on their trend stories and ran into other cherubs.

“It was nice seeing all the other cherubs outside of our study and work environment,” Weatherford said.

A week after the festival, cherubs shopped at the Downtown Evanston Sidewalk Sale. Many cherubs spent their money at Urban Outfitters, where sale items were 50 percent off.

Self-proclaimed sidewalk sale enthusiast Dan Waldman said he enjoyed the chaos of picking through the racks of clothing and trying to find something in his size.

“I think I spent more time there than most of the girls that went,” Waldman said.

Like Waldman, Shereen Al-Sawwaf of New Jersey found great deals at Urban Outfitters, then headed across the street to Second Time Around, a resale shop.

“I bought three pairs of designer pants for $5 each,” Al-Sawwaf said. “It was my first time in a thrift shop and I was so happy with everything I was able to buy for such a small amount of money.”