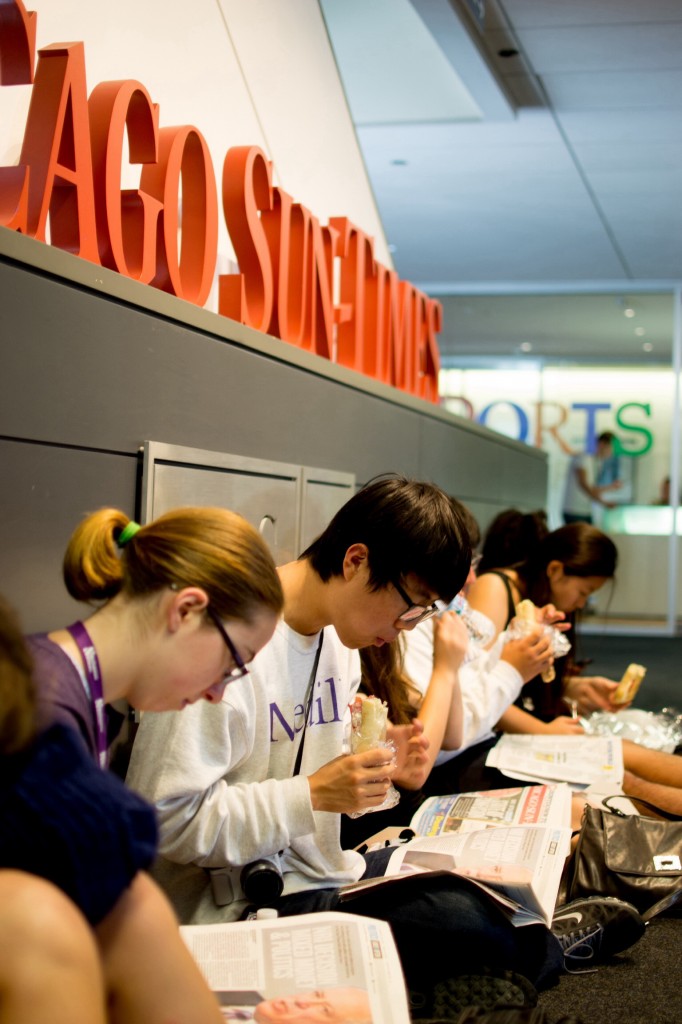 Anne Snabes and Brandon Kim join other cherubs for lunch and a tour of the Chicago Sun-Times. Photo by Jacob Middlekauff.
[/sidebar]

Television studios, newspapers and magazines opened their doors to the cherubs this summer, giving them a more concrete picture of a working newsroom.

At NBC Chicago, cherubs witnessed a live news broadcast and participated in a Q-and-A session with the station’s producers. The station is owned and operated by NBC Universal.

“I learned how a broadcast really works,” Sam Brief said. “When you watch on TV, all you can see is the anchor. Here you see the floor manager, and the control room, and the producers, and the directors. Now when I watch the local news, I’ll think more about the behind-the-scenes aspects.”

After the broadcast, the cherubs toured NBC’s facilities. Dan Waldman said he was impressed with the latitude given to a network affiliate.

“I learned that they have a lot more freedom at NBC Chicago than would be expected,” he said. “I would have thought that they would have been controlled by NBC. It is cool that you can work at major network in a major city and still give people the news you want to give rather than what the company wants to give.”

At ABC Chicago, cherubs were given a tour of the Chicago news station’s facilities. Staff at ABC Chicago allowed the cherubs to view everything from the anchor desk to the control room.

“I did not realize that the director of the control room runs so many things,”  Matt McHugh said. “I had thought that there were many people who did the behind-the-scenes work, but the director ran everything.”

The cherubs also spoke with many staff members, including anchors and technical workers.

At the Chicago Sun-Times, cherubs met accomplished journalists and toured a daily paper. The cherubs spoke with Pulitzer Prize winning crime reporter Frank Main and entertainment editor Darel Jevens. Main spoke about the changes in crime coverage during his years as a crime reporter.

Brandon Kim found the cops beat to be different than portrayed in popular culture.

“For crime reporting, you don’t always experience the cool things you see on TV,” he said. “You really do have to work hard to be accurate and concise.”

Jevens detailed the change from mainly print to digital journalism. Afterward, cherubs were taken on a tour.

“The newsroom was huge,” Grace Rogers said. “It was awesome to see journalists have other publications stacked upon their desks because it showed that they were really in tune with the news.”

At The Wall Street Journal, cherubs spoke with staff reporter Carrie Porter and toured the office. A national newspaper, The Wall Street Journal has 47 bureaus spanning six continents. Porter, who has taught undergraduate classes at Medill, described her experiences as a reporter, but she also was very interested in learning about the current cherubs.

Though she focuses on education, Porter reports on a wide variety of topics for the Chicago bureau.

Chris Grismer said he was excited to learn that being a journalist does not necessarily mean covering one specific field.

“You can be a flexible journalist,” he said. “You don’t have to specialize in any one thing.”

Porter took the Cherubs through the newsroom, where many staffers were happy to speak with the group.

“It was cool to see so many people enjoying their jobs,” Sophia Zaller said.

At Chicago Magazine, cherubs engaged in a Q-and-A session with several staffers. Operated out of the Tribune Tower, Chicago covers culture and politics, focusing on lifestyle and human interest pieces.

Editors of the publication detailed what it took to run the print and digital sides of a magazine.  Many cherubs were surprised there were only two staff writers.

“I’m especially interested in working in magazines,” Haley Glazer said, “so the fact that a publication does not carry staff writers is fairly jarring.”

The cherubs finished their day with a tour.

“It was interesting to see the offices and computers of a real newsroom,” Kelly Martinek said.

At Crain’s, the cherubs spoke with director of digital strategy Frank Sennett and social media coordinator Alexandra Trumball. Crain’s Chicago Business is a magazine focused on Chicago business, as well as real estate and politics. Sennett, a former cherub instructor, discussed his own personal experiences in journalism, as well as the running of Crain’s in Chicago’s large media market. Trumball, who recently earned a master’s degree from DePaul University, explained her job and its importance in the modern field of journalism.

“I never realized how much work it took to run the social media at Crain’s,” Alexa Corse said.

The cherubs then took a tour of Crain Chicago Business’s entire floor.

“From this experience, I learned how a newsroom actually works,” said Gillian Weatherford. “We got to see actual journalists actually working, which was really cool.”