Newfound freedom and the thrill of swiping a credit or debit card resulted in some difficult budgeting lessons for several cherubs. 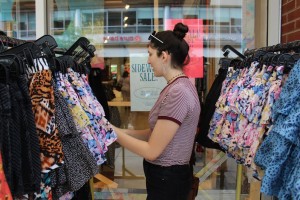 “I definitely spent more money than I thought I would,” said Christian Paz. “Coming into this trip, I took the information that said you only need about $25 to spend each week very seriously, but I came here and spent $70 within the [first few] days.”

Many cherubs struggled to limit themselves when dining out and shopping for groceries, said Marianne Dolan.

“I came here stalking every retail site I could think of, and I was ready to drop money on clothes,” Dolan said. “While the sidewalk sale has definitely dented my savings, it’s really food that has taken a toll.”

The variety of dining options in Evanston claimed much of her budget, Dolan said. The temptation to ditch dining hall food for Andy’s frozen custard, Lyfe Kitchen’s sweet potato fries and Whole Foods’ snacks was often too strong.

“Whole Foods has taken a huge portion of my income,” she said. “I spent an unreasonable amount there. It became so bad that the employees recognize me.”

In addition to spending money on food, cherubs bought souvenirs, Northwestern gear and clothes. Fueling their journalism addiction also consumed their cash, according to Paz.

“I spent the most money on newspapers and magazines,” Paz said. “For some strange reason I have this habit, this urge, to buy The Wall Street Journal every morning that I can, whether it means almost being late to class or waking up a little earlier so I can go to town.”

The imbalance between his spending habits and limited funds forced him to learn to budget, Paz said. Because his debit card was not working for the first couple of weeks of the program, he had to learn to be more frugal.

“I’m not a very good money manager, but this trip has made me better,” he said. “By the second week I was broke. I had no money with me because all of my money was on my card or in cash. I only brought about $100 in cash, so I was borrowing money from my friend Charlie Trepany.”

“I’m starting to see a change in him,” Trepany said. “Once you hit rock bottom you can only go up from there.”

Future cherubs should keep track of the money in their savings accounts diligently and stick to using cash to budget more effectively, Dolan said.

“I learned that even if I can’t see my money diminishing from my savings account, even the little purchases take money away from my account,” she said. “This trip made me more conscious of the money I spend.”